Former Deputy Prime Minister of the UK, John Prescott has played a pivotal role in British politics for over 50 years as a member of the Labour Party. Dedicated to creating policies that benefited the masses, John’s political contributions saw him hailed a popular figure of the Left, responsible for modernising the party throughout his career. Backed by decades of first-hand experience in the top echelons of government, John’s talks as an after-dinner speaker are enthralling for audiences. From exclusive anecdotes to insightful memoirs, John’s charming and charismatic personality is ideally suited to a range of occasions.

Taking to the position in 1997, John is the longest-serving Deputy Prime Minister in the country’s history holding the role until 2007, a testament to his commitment and popularity amongst the public. Selected to support Tony Blair in his decisions as Prime Minister, John was respected for his ability to bridge the gap between the working class and party politics, something that previous politicians had struggled the achieve. Resonating with the public is one of the reasons John maintained his parliamentary position for a history-making period, also gaining the title of First Secretary of State to evidence his seniority in the government.

Equally revered for his commitment to his constituency as the MP for Kingston Upon Hull for 40 years, and establishing the Department for Environment, Transport, and the Regions, John also fronted the subsequent divisions once separated. Under his leadership the department successfully negotiated the Kyoto Protocol, introduced the local government Code of Conduct, and was appointed as the Chairman of the Strategic Rail Authority, tasked with government support of the railways. At events, John elaborates on this period of his career, expressing his passion for protecting the environment, and the corporate responsibility to do the same.

Since stepping down from his high-profile duties, John has remained an eminent figure on the political circuit. Often seen offering insight into the media on current political affairs or contributing to councils and papers on specific government matters, John’s authority is still dominant. A regular on news outlets and informational programmes, John’s platform is expansive, capturing business, politics, and media, making him the ideal guest for any occasion and audience. For his services to British politics, he was elevated to the House of Lords, receiving a Life Peerage in 2010. 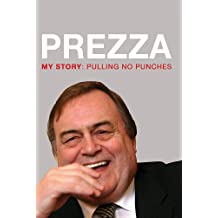 Prezza: My Story Pulling No Punches

How to hire Lord John Prescott

Contact the Champions Speakers agency to provisionally enquire about Lord John Prescott for your event today. Simply call a booking agent on 0207 1010 553 or email us at [email protected] for more information.