Former Father of the House, a role that is bestowed upon the member who has served the House of Commons for the longest amount of time, uninterrupted. Kenneth Clarke was an MP for Rushcliffe from 1970 to 2019 and has since established his reputation as an indispensable politician, forming a key part of three UK governments. Often referred to by the press as the "Big Beast" of British politics, Clarke has held a number of high ranking positions in parliament. Made a Member of the Order of the Companions of Honour in 2014, he has been previously been made a Queen's Counsel and was sworn into the Privy Council of the UK in 1985, giving him "The Right Honourable" title for life. Serving under Margaret Thatcher, John Major and David Cameron, Clarke is the fifth longest serving minister in modern history. After over a decade serving his constituency of Rushcliffe, he would adopt senior roles within the Conservative Party from 1985 onwards.

First serving as the Paymaster General and Chancellor of the Duchy of Lancaster, he would be promoted to the role of Secretary of State for Health under Thatcher in 1988. From there he would assume the roles of Secretary of State for Education and Science, as well as Home Secretary before leaving a distinct mark as Chancellor of the Exchequer and the Second Lord of the Treasury between 1993 and 1997 until Labour ended the Conservative Party's rein. As Chancellor of the Exchequer, Clarke was considered extremely successful, as he helped to ensure the UK's recovery from the recession of the early 1990s. On the back of Black Wednesday, he introduced a new monetary policy which reduced government spending, and resultantly the budget deficit from £50.8 billion to £15.5 billion from the beginning to end of his tenure.

While cutting the deficit by over a third, Clarke also managed to reduce inflation, interest rates and unemployment, prompting incoming Chancellor of the Exchequer Gordon Brown to also adopt Clarke's spending plans, in what was the ultimate compliment to his time as Chancellor. In November 2019, Ken retired from parliament. Outside of politics, Clarke has served as Director of Independent News and Media and British American Tobacco. He has become a regular contributor to the mainstream media, penning monthly columns for Financial Mail on Sunday, providing a weekly commentary for various television shows and presenting jazz programmes for BBC Radio Four. An engaging keynote politics speaker, whose knowledge and experiences stretches across five decades, Kenneth Clarke offers a wealth of stories that combine a number of themes, as well as an ability to dissect the political news of our time. 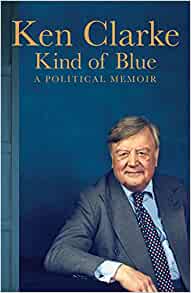 Kind Of Blue: A Political Memoir

How to hire Lord Kenneth Clarke

Contact the Champions Speakers agency to provisionally enquire about Lord Kenneth Clarke for your event today. Simply call a booking agent on 0207 1010 553 or email us at [email protected] for more information.

"Ken really was great, so knowledgeable, witty and sharp! It went brilliantly thank you so much." - Allied Irish Bank

"Our client was very happy with Ken and just as important so were the invited guests.  Also, he was very good during his radio interview with Newstalk. Ken was fantastic despite us having him out pretty late the night before!" - Wilson Hartnell