Entrepreneur Hilary Devey has been leading the way for women in business for over 25 years. Building her business from the ground up, Hilary acts as an inspiration to all, as she now enjoys international success both through her role as CEO of Pall-Ex and extensive media engagements. Named Vitalise Woman of the Year 2008, she has carved an illustrious career in a male-dominated industry and continues to thrive in whichever venture she embarks on thanks to her perseverance and ability to knock down barriers. Hear from the role model and business mogul yourself when you book Hilary for an inspiring after-dinner talk or invaluable business keynote speech.

Throughout her career, Hilary has amassed extensive speaking experience, due to the relevance of her talks. From championing women in corporate environments to taking a business to international heights, Hilary offers implementable advice on an individual and business-wide level. Having already shared her insight with the likes of T-Mobile, the Entrepreneurs Forum and The We Mean Business Conference, Hilary’s content is evidently applicable to a range of industries and supports businesses at every stage of development. Captivating audiences with the successes and failures of her career and relating on a personal level with her anecdotes of ambition, Hilary is revered for her role as a speaker, highly sought after for corporate occasions.

Founding Pall-EX in 1996, Hilary’s determination and resilience saw her quickly become a leader in the palletised goods sector. From being the third business of its kind established in the UK, to serving 38 countries daily and generating over £100 million in turnover, Hilary has spearheaded the brand to international acclaim. 20 years later she continues to act as CEO and Chairman, the inspirational woman behind the venture, and has been awarded the NatWest Every Woman Award, alongside the Businesswoman of the Year 2005 for her defining success.

Utilising her platform to help other budding entrepreneurs, Hilary is a former Dragon on Dragons' Den, where she further expanded her public image. Other media appearances by Hilary include on Secret Millionaire and as a presenter of The Business Inspector and The Intern. In 2012 she fronted ‘Hilary Devey’s Women at the Top’ where she investigated the gender imbalance in senior roles, a theme she explores as a speaker. With such an extensive and poignant career, Hilary now commits much of her time to philanthropic activities, giving back to communities and individuals, which saw her awarded a CBE in 2013 as a culmination of her services to transport and charity. 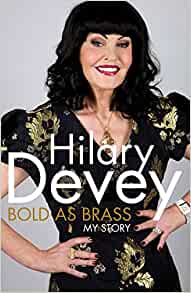 Bold As Brass: My Story

How to hire Hilary Devey

Contact the Champions Speakers agency to provisionally enquire about Hilary Devey for your event today. Simply call a booking agent on 0207 1010 553 or email us at [email protected] for more information.

Hilary's speaking topics are listed below.

"Hilary Devey went down an absolute storm at this year’s Business Show! She was the final speaker on the last day of the show and hundreds of people remained to watch her. She was interviewed on stage and delivered a thought provoking seminar full of hilarious anecdotes about her life and her business. With the crowd in the palm of her hand, she eloquently relayed the successes and failures from her life in a way that both captivated and inspired the audience. I approached Hilary’s team knowing that she was a popular figure with a very large fan base, but I never imagined it to be so well received. Even when a herd of people were trying to get Hilary’s autograph and picture at the end of the interview, she handled it fantastically and had a great deal of time for her fans, offering kind words of support and the opportunity to contact her after the show with their queries. It also must be said that Hilary and her team were an absolute delight to work with from start to finish and we’d be delighted to invite her to speak at any of our events in future." - Hassan, The Business Show

"Hilary Devey recently spoke for us at a conference for 120 owner/managers of small and medium sized B2B supplies companies. The audience were enthralled by her presentation in which she highlighted her personal journey from childhood, through the trials and tribulations of starting and building a business, to her position today as a highly successful entrepreneur and TV personality. The audience felt Hilary was one of their own, and were inspired to believe that they too had the opportunity to achieve what she has. It was a tribute to her empathy and natural, witty approach." - David, The Sporting Dining Club

"We had great feedback from Hilary’s talk; everyone enjoyed hearing her inspirational story." - Lorraine Miller, Institute of Anti-Ageing

“If you want a business speaker who can really move an audience, speak from experience and leave the conference delegates motivated and inspired, Hilary Devey is your speaker; she captivated our audience of 300 and had a standing ovation - a rare sight. Unreservedly recommended.” - Jonathan, The Nationwide Alliance of Business Owners

“I am writing to thank you so much for being the key note speaker at our 25th Big Birthday Message conference. The talk was simply inspirational and magnificent; you connected with every person in the room. I am so grateful to you for giving up your time for Llamau and please accept my sincere thanks for making our 25th Birthday Message the resounding success it was." - Chief Executive, Llamau

“At Business Lancashire, we offer a platform for promoting good news Lancashire based business stories and we look forward to working with Hilary in the future, especially around her thought leadership comments on the role of Startups and SMEs”. - Sam, Business Lancashire