Internationally successful banker and investor, Richard Farleigh’s career has been remarkable, a true rag to riches inspiration. From Australia to Bermuda, Monaco to London, Richard’s influence on the investment sector has taken him around the world, sought after for his capabilities in predicting the markets. Now with a platform that covers business and media, Richard is transforming his high-profile career into tangible advice, utilised by audiences of his keynote and after dinner talks to replicate his success and learn from his mistakes.

A unique addition to any occasion, Richard builds a natural rapport with guests, whether they’re a corporate client or aspiring professionals. One of the most successful employees of Bankers Trust Australia, Richard thrived at the bank for a decade, making his way from underdog to top dog, and becoming the bank’s individual biggest money earner. Investment banking involved the balance of risk and reward Richard effortlessly achieved and perceptive analysis that lends itself to his analytical mindset.

With an established reputation for success in his field, Richard was headhunted in 1993 to oversee a hedge fund in Bermuda, a testament to his unrivalled abilities. An expert in banking, Richard discusses the intricacies of his career in the fast-paced world of finance, as a speaker, and shares his lessons learned with audiences. Overcoming obstacles is something Richard has had to do from the outset. As an infant he was living in poverty, lacking a permanent home or stable family unit, however, fostered and later adopted by a loving family, Richard’s future potential transformed.

At school, evident was Richard’s natural talent for maths, a talent that led him to secure a scholarship to study Economics at the University of South Wales, supported by Australia Central Bank. Having also taken up playing chess at school, Richard pursued this through university and further into later life, eventually competing in the 31st and 34th Olympiad for two separate countries. After a brief retirement, Richard knew aged only 34, he wasn’t done making influential contributions. Since making a return to business, he has transformed the iconic Home House into an affluent Member’s Club, completed two series as a Dragon on Dragons' Den, and invested in numerous opportunities, including the hugely successful Net-A-Porter. Currently, he acts as the Chancellor of London South Bank University and inspires others through his publications and speaking engagements. 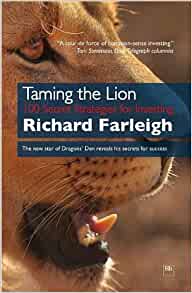 How to hire Richard Farleigh

Contact the Champions Speakers agency to provisionally enquire about Richard Farleigh for your event today. Simply call a booking agent on 0207 1010 553 or email us at [email protected] for more information.