Deborah Meaden spent time as an investor on the popular Dragons' Den. She is one of the most well-known British entrepreneurs, a perfect choice for business conferences, and after-dinner speeches. Deborah started her journey into the world of business like most entrepreneurs, at a young age. Her first venture was a simple export company which eventually became large enough for her to start up a fashion franchise. After working in the fashion industry for several years and getting her bearings in the world of business, she moved into the leisure industry to pursue the retail industry.

She spent several years running successful companies before eventually being appointed the Managing Director of Weststar Holidays, a holiday park owned by Deborah’s family. Her successes are in the shadow of one of her biggest career decisions. As a leading shareholder in the company, she was able to sell her shares for an incredible £33 million. During her time at the helm, she transformed the company into a money-making machine which boasted a high-quality vacation for consumers. After selling her shares in the company, she still retained 23% ownership.

For a period of time after this incredible buyout, she continued to innovate and develop the company. Eventually selling her remaining shares for £83 million, essentially making £116 million while running the company. Deborah's ability to turn a corporation around and create sustainable growth and success has led her to develop a reputation as one of the most respected business speakers on the after-dinner circuit. After Weststar, Deborah became a corporate investor and a household name as an investor on the hit BBC show, Dragons' Den.

Since then, Deborah has equity in sectors spanning baby products, antique valuation and even a recipe website. Her wide portfolio of businesses in a range of corporate sectors enables her to see consumer spending and behaviour for different types of stores, giving her unique insights into retail trends and strategies and at a level that would be the envy of any board member or business management speaker. Aside from her business investments, Deborah plays an active role in major charity organisations, becoming an ambassador for WWF in 2009 and a patron of Tusk Trust, who strive to alleviate poverty and promote education across Africa.

As a retail speaker, Deborah aims to inspire and motivate audiences to follow in her footsteps whilst interacting constantly with audience members, making her an ideal conference host. Deborah first-hand experiences create an invaluable experience for all who are listening. 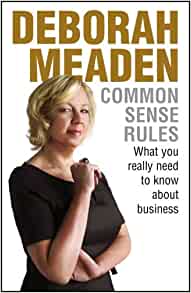 Common Sense Rules: What You Really Need To Know About Business

How to hire Deborah Meaden

Contact the Champions Speakers agency to provisionally enquire about Deborah Meaden for your event today. Simply call a booking agent on 0207 1010 553 or email us at [email protected] for more information.