Former professional title holding boxer turned award-winning charity campaigner, Dr Mark Prince is a model example of utilising your circumstances for change. All too familiar with overcoming adversity, the once drug-abusing youth became a world-renowned fighter, to later reinvent himself once more after the death of his son to ensure others don’t suffer the same grief as him. An inspirational speaker, Mark’s life journey has been nothing short of remarkable, and his experiences make for a truly captivating after-dinner speech.

Previously the holder of the IBF Inter-Continental and WBO Inter-Continental titles, Mark’s boxing talents were internationally renowned. A light-heavyweight of the sport, in his entire career he only lost one bout, when he contested the illustrious world title in the late 90s. Having had a difficult upbringing, boxing brought a level of purpose, discipline and success to the rapidly escalating lifestyle Mark led, influenced by violence and drugs. In a true rag to riches story, the star sportsman showcased his natural agility in the ring as he garnered the world’s attention with his impressive results. 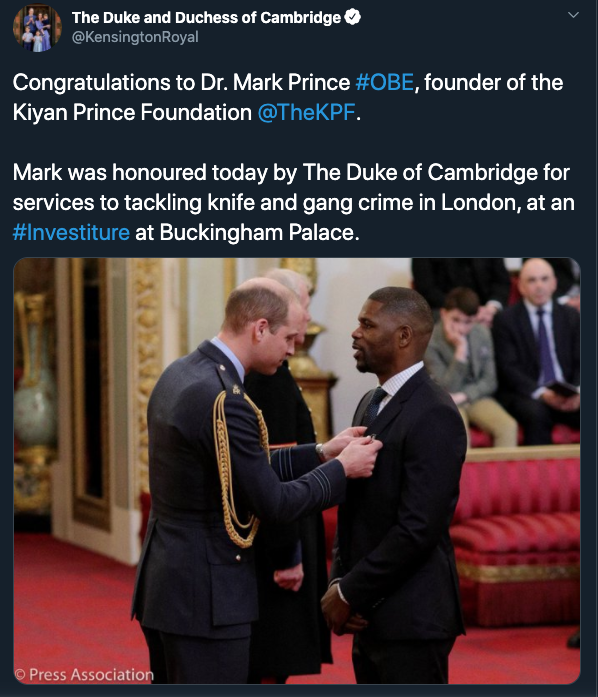 Hanging up his gloves, Mark had a world of opportunities ahead of him, which, came crashing down around him in May 2006. After his son passed away, a teen victim of knife crime, Mark had two choices, to crumble with his world, or rebuild it. Utilising mental resilience, strength of character and an unfaltering drive that boxing had instilled in him, Mark once again transformed, not only his future but hundreds of others.

Driven by the need to prevent knife crime, Mark founded The Kiyan Prince Foundation in 2007, which used his platform and experiences in sport to create positive change. Awarded an OBE for his Services to Tackling and Gang Crime in London, Mark has solidified the legacy of his late son and influenced a generation. In 2019, fans of Queens Park Rangers voted to change the name of their famous training ground to reflect the impact Kiyan Prince had as a player in their youth team. A positive and powerful influence, Mark's prominence has also seen his son Kiyan included in the 2021 FIFA video game, commemorating the 15th anniversary of his death. Continuing his involvement in sport, Mark is a qualified personal trainer working predominantly with youths, instilling the same essential qualities for success in them, that boxing did for him. A true inspiration, Mark was awarded the Children’s Champion Award.

Hear first-hand Mark’s compelling life story, an in-depth look at knife crime and the qualities that make and break us, with an after-dinner talk from Mark Prince. Called upon to speak at a variety of corporate and public events, Mark shares his perspectives on various socio-economic issues that not only impact young people but also families globally. Highly regarded for his authority as a speaker on knife crime, Mark has previously been the Executive Producer of Put the Knives and Guns Down and spoken for the Metropolitan Police Operation Trident Program. He has also spoken 1-2-1 with Mayor Sadiq Khan on London's knife crime epidemic and been a guest speaker at the National Governor Prison Association Conference and the National Black Crown Prosecutors Association Conference. Dr Mark Prince is the perfect addition as a speaker to increase awareness of socio-economic issues, ensuring that the legacy of his son is carried forth and action is seen across the globe in combatting knife crime.

How to hire Dr. Mark Prince

Contact the Champions Speakers agency to provisionally enquire about Dr. Mark Prince for your event today. Simply call a booking agent on 0207 1010 553 or email us at [email protected] for more information.

"Mark visited my school to work with my pupils during July 2015. My school for pupils with Learning Difficulties and Behaviour & Social Needs is situated in Hull, Mark committed to travelling all the way from London to Hull to work with and inspire my pupils. Mark facilitated a fitness and well-being session with my pupils supported by a key work mentoring session in the afternoon getting the pupils to reflect on their pasts, present and futures. My pupils were truly engaged with Mark and his life story, he has an ability to connect with all young people regardless of background, gender, colour or faith. The passion and drive he has for his work and to contribute positively to our vulnerable young people is amazing, Mark and the KPF show real outcomes and positive impact with the most hardest and disengaged young people. I will be working closely with Mark for many years to come and would strongly recommend Mark and the Kiyan Prince Foundation to anyone who works with disaffected young people and adults. Funders, Local Authorities and Government should all prioritise funding and policy focus on engaging with charities such as the KPF, Mark is a sector leader in this type of intervention. Mark is a real friend of our school and pupils and we have continued the momentum from Mark’s visit showing great outcomes for our young people."

"My name is Miss Maxine Dyer I was employed at Park View School (formerly known as Park View Academy) from April 2003-August 2016; over the years I held several positions, including the following: Student Support Centre Manager; Social Emotional and Behavioural Development Coordinator; Safeguarding Officer as well as Emotional Wellbeing Coordinator."

"I first saw Mark Prince on the TV being interviewed about Kiyan’s murder. He said that he “hoped the young man who murdered Kiyan would one day work for The Kiyan Prince foundation”.  I remember standing in my living room crying as I listened; I was struck by Mark’s Christ like nature, strength of character, humility, meekness, forgiveness, compassion and genuine love for young people.  I was reminded of Romans 8:28 “And we know that all things work together for good to them that love God, to them who are called according to his purpose.”

Mark was involved in various projects and interventions from 2007-2012 at Park View School, including the following:

On the 20th January 2011 student Kasey Gordon was murdered in a knife attack just outside Park View School; Mark worked three days per week mainly with Year 11 students in preparation for their GCSE’s as well as supporting them during Kasey’s murder trial.

Our students found it easy to relate to Mark and they appreciated his openness and honesty. They were touched by his loving and forgiving nature despite his own loss. They also deeply respected him and knowing that he genuinely cared about them enabled them to open up to him.

Mark worked with some of our most vulnerable students, many of whom were at risk of exclusion and were known to the police and youth offending service; Mark motivated and inspired them to reach their full potential, striving for success in education and sport instead of a life of crime.