Kenton Cool is a leading British high-altitude mountaineer and motivational speaker. Having successfully climbed Mount Everest 16 times, Kenton has led multiple expeditions including Sir Ranulph Fiennes' 2008 and 2009 expeditions. Cool has completed 21 successful expeditions in the Greater Ranges. In 2011, he successfully made the first 3G call at the summit of Mount Everest as well as the first social media update at the summit of Mount Everest. More recently, in 2013, Kenton and his climbing partner became the first people to traverse Nuptse, Everest and Lhotse in a single expedition without returning to base camp.

He studied BSc Geological Sciences and graduated in 1994. First introduced to mountaineering at Scouts, his obsession developed during his time at the University of Leeds and on graduating, he moved to Sheffield to pursue this obsession further. In 1996, Kenton suffered a fall from a rock face and shattered both of his heel bones. After a year of surgery and therapy, Kenton was more determined than ever to regain his climbing form and he joined the British Association of Mountain Guides scheme.

Additionally, Kenton spends his time working as a Director of Dream Guides, A Chamonix-based mountain and ski guiding company. A leading Alpine climber, Cool operates in the Alps and Greater Ranges of the Himalayas as a fully qualified IFMGA Guide and Expedition Leader. In 2003, Kenton was nominated alongside partners for the Piolet d'Or Award for a route on Annapurna III. Further along the line, in 2012, he made good on an Olympic pledge by taking one of the 1924 Olympic Gold Medals awarded to the 1922 British Everest Expedition to the summit of Everest. This prompted Lord Sebastian Coe to personally thank Kenton, as well as his team for helping to 'kick start the 2012 Olympic Games'.

In 2022, Kenton secured his 16th summit of Mount Everest, a record-breaking feat that saw Kenton become the first non-Nepali person to summit the mountain 16 times. In his presentations Kenton explores the direct comparisons between summit expeditions and business, focusing on the themes of teambuilding, leadership, motivation and facing personal fears in adverse situations. His years in the mountains, both as a climber and Expedition Leader have taught him how to face and overcome challenges, whilst bringing out the best in those around him. 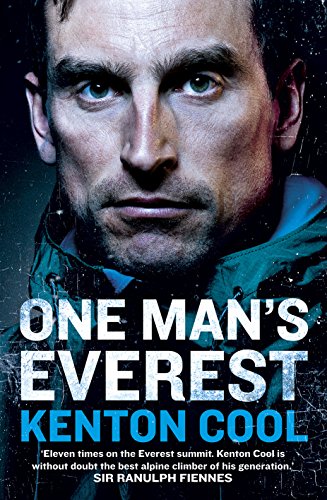 One Man's Everest: The Autobiography of Kenton Cool

How to hire Kenton Cool

Contact the Champions Speakers agency to provisionally enquire about Kenton Cool for your event today. Simply call a booking agent on 0207 1010 553 or email us at [email protected] for more information.

"All went really well yesterday - Kenton was fantastic - really personable, great presentation - we loved him. Thanks so much to you and the Champions UK team - excellent recommendation." - Sandy, International Marketing Director, Anika Therapeutics Inc

"Really engaging, inspiring and thought-provoking. You'd obviously given the themes a lot of thought and it resonated very clearly with some of the issues we are grappling with across the business (one team, leadership, risk-taking etc)" - Chris, HR Director, CBRE

"Kenton was excellent, superb! His talk was totally inspiring and motivating and his stories and footage of his summit trips were very impactful. He is so driven and passionate about what he does and this clearly came across to the team. They could relate to many of his examples of challenges he has overcome when he is on his trips. Absolutely brilliant, I would definitely recommend Kenton to others!" - Meryem, Head of Strategy and Planning, Lloyds Banking Group

"The world in which Kenton has such a distinguished record of achievement is, of course, very different from that inhabited by LSEG. Yet, as he compellingly made clear, the qualities required to overcome obstacles are in essence the same whatever the field. In what was a highly successful Leadership Forum, Kenton’s contribution was outstanding – as the volume of enthusiastic feedback I’ve had from members of the team confirms. I have no doubt that going forward, we’ll be drawing added strength from his words as we seek to reach our own challenging goals." - Xavier, CEO, London Stock Exchange Group