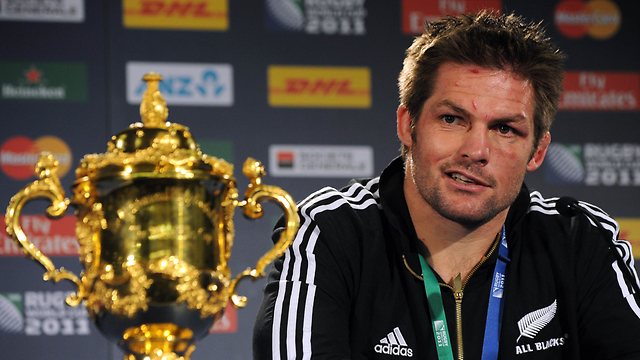 The iconic New Zealand captain, 34, broke the news at an All Blacks press conference in Wellington on Thursday – he had previously hinted at calling time on his career after the 2015 World Cup and he was not included on the Crusaders’ roster for the 2016 Super Rugby season.

McCaw leaves the game as the most capped Test player in rugby history in an international career spanning 14 years. He made his debut against Ireland at Lansdowne Road in 2001 and last month’s World Cup final victory over Australia at Twickenham proved to be his final game in an All Blacks jersey.

Ever since being named as New Zealand’s youngest captain at the age of 23 – against Wales in 2004 – he has broken records with the same frequency as he did the spirits of opposition players.

McCaw also became the first All Black to reach 100 Tests in 2011, has captained the side 111 times and won 89 per cent of the games in which he played.

Alongside the World Cup winners’ medals, his trophy cabinet also boasts 10 Bledisloe Cups, 4 Tri-Nations titles and 3 Rugby Championships. Put simply, he is one of the greatest rugby players of all time.

Champions Speakers boasts a number of individuals who, like McCaw, competed at the World Cup and even claimed the Webb Ellis Trophy.

Key members of England’s class of 2003, to this day the only Northern Hemisphere team to clinch rugby union’s biggest prize, are available to book as keynote or after dinner speakers, including captain Martin Johnson CBE, talismanic fly-half and kicker Jonny Wilkinson CBE and even Sir Clive Woodward, the man who masterminded the team’s success in Australia.

We can also bring you World Cup winners from other nations, such as Australian Michael Lynagh, who claimed a winner’s medal in 1991, and New Zealander Zinzan Brooke, triumphant in the inaugural tournament back in 1987.

If you wish to book any of the above or to enquire further about more of our rugby speakers, contact Champions Speakers by filling in one of our online forms or calling a member of the team today on 0207 1010 553.