Described as a "rising star in the London dining scene", Tom Sellers is a famed Michelin-starred chef. Since he first made his mark on the industry, he is now considered to be a leading chef on the scene, a pioneer of gastronomy. Forward-thinking and passionate, Tom is respected for breaking conventions, having made a statement with his casual, yet utterly delicious, dining experience. As a booking opportunity, few are quite as engaging as Tom. Audiences revel in his presentations, as he expertly discusses gastronomy and takes guests on a culinary journey.

Born in Nottingham to a working-class family, his first job was in a pub kitchen aged 16. After establishing himself as a promising chef, he then moved to London to be tutored by Tom Aikens, esteemed chef. Tom Aikens holds the title as the youngest double Michelin-starred cook, making him an influential teacher to Tom. Tom spent a lot of his younger years travelling and cooking, journeying across Europe and the US to taste the different cultures. He cooked in some of the most prestigious restaurants in the world.

Aged 26, Tom opened his first restaurant, Restaurant Story. Despite his youth, his extensive, international experience quickly earned him a Michelin star, within just a year. By this point, Tom was also an Executive chef at The Lickfold Inn. The prominent role at the Grade-II listed pub is a testament to Tom's business leadership skills. Capable of producing high-performance teams, especially in such pressurised working conditions as a kitchen, Tom favours discipline, application and dedications in his chefs.

Tom's restaurant visually compliments the food. It is classy and sophisticated, artistic in design. Similar to Tom's food, he values the entire dining experience of his guests. From personable waiting staff to perfectly constructed dishes, he is quoted saying that he taught his team to "do a little better every day". He is also a published author, releasing A Kind Of Love Story in 2016. The book takes its reader through different recipes and Tom's memoirs, offering contextual narratives to Tom's most loved dishes. At events, he is an authoritative voice on gastronomy, offering his audience an expert insight into cooking. Calm and calculated, Tom's focus is impressive, his passion for cooking infectious.

Contact the Champions Speakers agency to book Tom Sellers for your event today. Simply call a booking agent on 0207 1010 553 or email us at agent@championsukplc.com for a free quote. 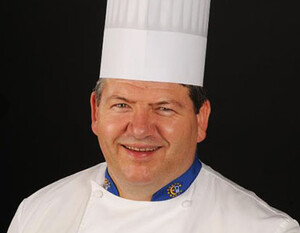