Ryan Campbell is the youngest solo pilot to circumnavigate the globe, he is a bestselling author and a motivational keynote speaker who inspires teams to be resilient and to have a positive mindset. Learning to walk and fly again after miraculously surviving a plane crash in 2015, with life-changing injuries, Ryan displays his courageous mindset and determination. He now travels the world sharing his story with others, teaching them the valuable skills that aided him in his recovery.

From a young age, Ryan demonstrated his ambition and can-do attitude, working several jobs to raise money to finance his dream of becoming a pilot. Taking lessons at 14 he was able to fly solo by 15 a truly remarkable achievement for someone at that age. Not contented with his accomplishment, Ryan began pursuing a bigger dream, to fly a single-engine aeroplane solo around the world. Personally fundraising $250,000, he spent two years training and planning his journey to circumnavigate the world. For his audacious plan, he was featured on 60 Minutes and made appearances in several prominent TV, radio, and print publications.

Making international headlines, he set off on his record-breaking expedition setting history at 19 for the Youngest Solo Pilot to Circumnavigate the Globe. Immediately after completing his journey, Ryan Shot to fame, he was highly in demand for speaking engagements and had the opportunity to meet with the Royal Family. Unfortunately, without warning Ryan’s life was about to turn upside down. In an instant, following a plane crash, he became a complete paraplegic suffering multiple breaks in his back and other parts of his body, extending from his face to his feet.

Named One of Australia’s 50 Great Explores, Ryan is also best selling author of Born to Fly. As a highly sought after motivational speaker, he has delivered exceptional speeches to several leading clients including, Mars, Wawa, Gilead, and Money Mart to name a few. He has been featured on the BBC, USA Today, Australian Geographic and The Daily Telegraph. A great example of someone who practices what they teach, Ryan Campbell is a phenomenal motivational speaker to book. 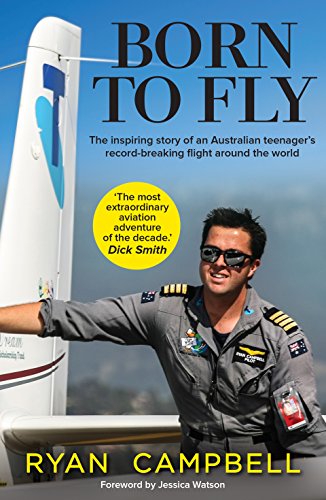 How to hire Ryan Campbell

Contact the Champions Speakers agency to provisionally enquire about Ryan Campbell for your event today. Simply call a booking agent on 0207 1010 553 or email us at [email protected] for more information.

Ryan Campbell is a tremendously talented, passionate and compelling speaker. He has an engaging personality that brings you into his story of accomplishments as a pilot and, while amazing in their own right, pale in comparison to overcoming a life-altering plane crash, the heartbreak of becoming a paraplegic, to once again being able to walk and fly his own plane. He is passionate about encouraging others to chase their dreams, about what it means to rise, fall, and rise again, and how to adapt when circumstances demand it. Ryan lives every day to share his story so that others can live victoriously, regardless of the road you find yourself on. - Mike - Westfall Gold

From the minute I talked to Ryan and heard his story, I knew that he was perfect for the OH SHRM conference and he did not disappoint. Ryan was engaged with our attendees through the entire week, attending sessions and networking. His closing Keynote was amazing and taught us all how to build our mindset toolbox. What do we as individuals need to be resilient and TurbulenceTough? He made us laugh, he made us cry and he was real! I can't recommend him enough! - Kim - SHRM

We hired Ryan to motivate our team to close out the year strong - Ryan's story is a powerful one. What we got was so much more. In this day and age of back to back Zoom meetings and less time spent together as colleagues, Ryan's 'Pink Cadillac' message was something our team took to heart. We learned more about each other, and most importantly, what was most important in our lives. Thank you Ryan! - Peter - Sprout Social

Ryan’s story is an example of someone that has determination, resilience and purpose. He knew he was born with purpose and was not going to let adversity stop him from fulfilling that purpose. If anything, he took those challenges head-on which made his journey even more adventurous. Truly inspiring! - Ronda - Wawa