Remi Adeleke has enjoyed a decorated military career, having served for 13 years as a US Navy SEAL. Born in West Africa, Remi moved and grew up in the Bronx, before joining the US Navy in 2002. Today, Remi is joining the Directing Staff of SAS: Who Dares Wins on Channel 4, and is also a seasoned actor having starred in some of the world’s biggest blockbusters. Now also booked as a speaker for a range of events, Remi is sought after to share the highlights of his decorated military career and the skills of leadership, teamwork and risk management he built along the way.

Moving to the Bronx in his youth, Remi spent much of his adolescence getting in trouble with the law, attempting to make money. Deciding to take a positive path, Remi joined the US Navy in 2002, and enjoyed a decorated 13 years in the forces. Demonstrating how perseverance transformed his circumstances and taking ownership of his mistakes led him to success, Remi is a truly inspirational military veteran who has experienced some of the most hostile environments known to man. After retiring from the forces, Remi has made it his mission to educate, inspire and motivate people around him, sharing his journey from adversity to military success as a motivational speaker.

Now a father of four, Remi dedicates his time to inspiring people to overcome adversity by owning their mistakes and persevering, alongside acting in films such as Transformers: The Last Knight and 6 Underground. He has also become a published author, having written the book Transformed: A Navy SEAL’s Unlikely Journey from the Throne of Africa, to the Streets of the Bronx, to Defying All Odds. Renowned for his military services, Remi was recruited to join the Directing Staff of the hit Channel 4 series SAS: Who Dares Wins in 2022 – joining Rudy Reyes, Jason Fox and Mark Billingham to put the contestants through their paces to see if they have what it takes to survive the Jordanian Desert.

A military veteran, Remi is now a popular choice as a speaker for a range of corporate and public speaking events, sharing his decorated military career with audiences. Detailing his life story of overcoming adversity and succeeding in the military, Remi educates audiences with his expertise in leadership, teamwork, team building, risk management, crisis and disaster management. Focussing on inspiring, motivating and educating people, book Remi Adeleke to speak at your next event when looking for a decorated military veteran to inspire your audience.

Do not miss our exclusive interview with Remi Adeleke! 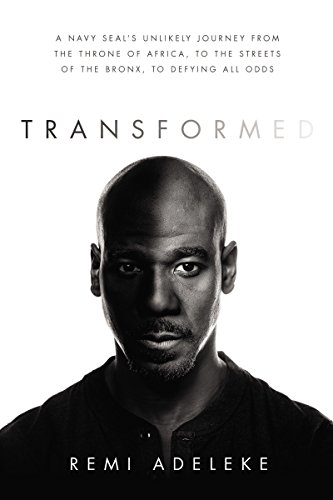 Transformed: A Navy SEAL's Unlikely Journey from the Throne of Africa, to the Streets of the Bronx, to Defying All Odds

How to hire Remi Adeleke

Contact the Champions Speakers agency to provisionally enquire about Remi Adeleke for your event today. Simply call a booking agent on 0207 1010 553 or email us at [email protected] for more information.