Rudy Reyes has enjoyed a diverse yet successful career, having spent several years protecting his country in service as a Recon Marine in the United States Marine Corps. Joining the forces aged 26 in 1998, Rudy completed training for the Marine Force Reconnaissance and expanded his knowledge in paratrooper operations, surveillance, air assault and demolition. Having served in Pakistan and Iraq, Rudy knows first-hand the challenges of combat. Now a member of the Directing Staff on SAS: Who Dares Wins, Rudy is putting contestants through their paces in the Jordanian Desert. Book Rudy today to share experiences from his history as a Recon Marine.

Born on the Richards-Gebaur Air Force Base in Kansas City, Rudy has been surrounded by the military for most of his life. With his father serving in combat in Vietnam, Rudy and his siblings spent much of their childhood bouncing between various family members. After his grandparents passed away, Rudy was placed into the Omaha House for Boys, before emancipating himself to take formal custody of his brothers at 18. In his early years, Rudy became a Martial Arts champion, claiming 14 gold medals – with four victories at Wushu-Kung Fu Midwest Championships and 10 at the Jing Woo International Grand Championships. Such talent motivated Rudy to protect and serve his country, joining the United States Marine Corps in 1998.

Having received Honour Man and Iron Man Status, Rudy quickly made his impression in the forces and was selected to become a Force Recon Marine. After several years of training in resistance, evasion, survival and escaping, Rudy embarked on missions that included locating and destroying Al Qaeda in Afghanistan, the 1st Recon Battalion invasion of Iraq and the Battles of Fallujah and Rahmadhi – reported as one of the Most Dangerous Places in the World by Time Magazine. After retiring from his decorated military career, Rudy has focused his attention on acting, starring in the HBO series Generation Kill, Apocalypse Man, Spartan Race and Ultimate Survival Alaska. He has also starred in the documentary Once Upon a Time in Iraq and the film The Secret of Sinchanee.

Also a passionate conservationist, Rudy is the founder of Force Blue Team – an initiative taking former military members to rebuild and restore coral reefs. Now starring on the hit Channel 4 series SAS: Who Dares Wins, Rudy will be joined by Jason Fox, Mark Billingham and Remi Adeleke to put contestants through their paces and see if they have what it takes to navigate the harsh terrain of the Jordanian Desert. With a decorated military career to his name, Rudy is now available to hire as a speaker for a range of speaking engagements- focussing on his military history. Author of Hero Living: Seven Strides to Awaken Your Infinite Power, Rudy is an expert in all things risk management, crisis and disaster management, security and overcoming adversity. When looking for a decorated military veteran to speak at your next event, book former US Recon Marine Rudy Reyes. 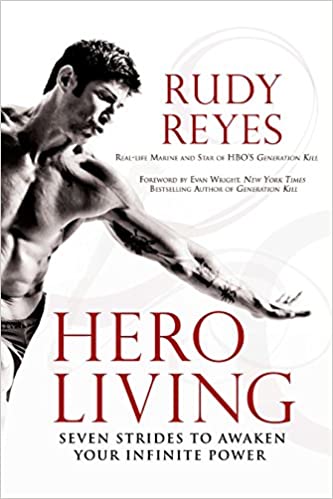 How to hire Rudy Reyes

Contact the Champions Speakers agency to provisionally enquire about Rudy Reyes for your event today. Simply call a booking agent on 0207 1010 553 or email us at [email protected] for more information.