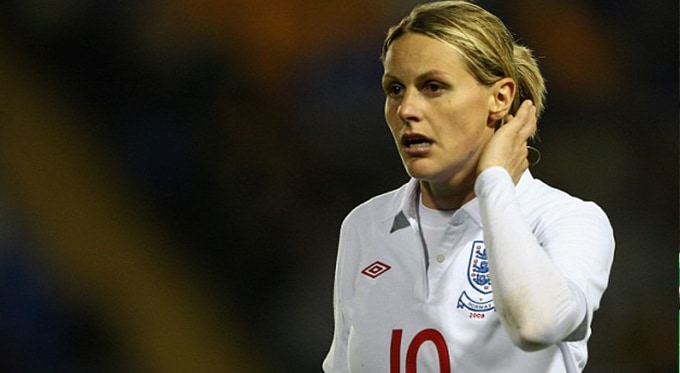 Champions after-dinner speaker and former England and Arsenal female footballer, Kelly Smith MBE was last night honoured at the 2017 PFA Awards. Widely regarded as the greatest ever English female footballer, she holds the England national team goal scoring record with 46 in 117 games over the course of her 20-year international career.

Kelly announced her retirement from the game just a few months ago and on Sunday night, was awarded the PFA Special Achievement award. On receiving her award, she said “When I started playing football as a little girl, I would never have imagined I would end up where I did. My 20-year career was phenomenal with lots of highs but I’ve enjoyed every moment of it and feel very privileged to pick up this award.”

The main award on the night went to Chelsea’s French midfielder N’golo Kante. The 26year old has had a fantastic season and after miraculously helping Leicester City become Premier League champions in 2016 he looks set to win it again with Chelsea four points clear at the top.

Numerous famous faces from the footballing world have sung the praises of Kante including Gary Lineker, Alan Shearer and Danny Murphy.

Despite being snubbed for the player of the year shortlist, Tottenham’s Dele Alli won his second consecutive PFA Young Player of the Year award. The midfielder has scored 16 times for Spurs this season as the North London club challenge Chelsea for the title.

Former England captain David Beckham received a similar award to Kelly on the night being presented with the PFA’s Merit award for his contribution to the game.

Champions after-dinner speakers has a whole host of individuals from the world of sport and entertainment who can provide engaging and informative speaking events and conferences. For booking information on any of our speakers call us on 0207 1010 553 or complete our online form.