Former best long jumper in the world, Greg Rutherford has had an illustrious career in the world of athletics. World records, to Olympic golds, Commonwealth titles to British Championships, Greg Rutherford is one of the most decorated athletes in his event, and has since used his platform to become a presenter for sports and charity programmes. An ideal choice of after dinner speaker, Greg Rutherford not only has a fascinating career to reflect on but the stage presence and charisma able to charm and engage an audience all evening long.

As a track and field champion, Greg Rutherford is hailed as one of the best athletes that the UK has ever produced. Reaching the peak of his career in 2015, Greg Rutherford held every elite outdoor title in long jump, a total of six available wins, including the Diamond League, World Championship and Commonwealth. A highlight for Rutherford was gaining his first Olympic Gold medal on home ground at the 2012 London Olympic Games, the feat solidified him as a British icon and saw him recognised with a prestigious gold postbox as a sign of his victory. Currently, the British world record holder, Greg Rutherford’s highest jump recorded outdoors is 8.51 meters.

Evident from his youth was Greg Rutherford’s talent at sports. Whether he was playing rugby, tennis or badminton he exuded confidence and skill, and was even scouted for a trial with Aston Villa football club at fourteen years old. Decided to pursue a career in athletics, Greg Rutherford became the youngest ever winner of the long jump at the AAA Championships, when he achieved the first place aged eighteen. With a British junior record under his belt and impressive debut results, Rutherford became known as a rising star of the sport.

Since stepping into the spotlight as a sports sensation, Greg Rutherford has become a popular face in the media as a British icon. Strictly Come Dancing, Would I Lie To You? And The Million Pound Drop Live are just a few of the shows he has appeared on as a public favourite. In 2019 he showed his talents go beyond sports into cooking when he was crowned the Celebrity MasterChef winner. Proud owner of a European Athletics Lifetime Achievement Award and MBE as pronounced by the Queen, Greg Rutherford is one of Britain's best loved athletes and the former world number one long jumper. As an experienced after dinner speaker Greg Rutherford shares his influential career with audiences and provides entertaining insight into the sporting industry. 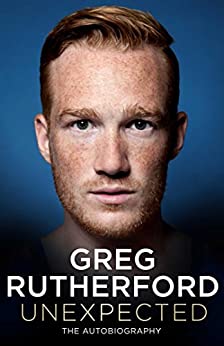 How to hire Greg Rutherford

Contact the Champions Speakers agency to provisionally enquire about Greg Rutherford for your event today. Simply call a booking agent on 0207 1010 553 or email us at [email protected] for more information.

When he's at corporate events, Greg is known to cover the following topics:

"We were very pleased with speech day. Greg gave a great speech and I’m sure the children will remember the phrase “fat don’t fly” for years to come! He was very generous with his time meeting the children, posing for photographs, etc after his speech. Thank you for your efficient organisation."
Adelaide - Heath Mount School

“A quick email to thank Greg again for everything he did on 7th November at British Rowing's training base. SAS couldn't have been happier and feedback from athletes and staff has been absolutely glowing.” - Tim, rEvolution

“Greg was bloody wonderful! Brought a real energy to the room with his personality and active engagement of the audience. He was a strong end to the day and having him stay to present the awards to the colleagues was a wonderful gesture making that moment even more special for them. A great story, lots of humour and nice anecdotes all told incredibly eloquently and with a great smile! Opened up the room for questions which went down really well, and he definitely won the room over! 50% of the room (at least) were ‘drooling’! Such a gentleman too. He was an absolute pleasure to work with, pre, during and post the event…he even gave one of the team a lift to the station! The post event feedback on Greg’s session has been resoundingly positive. People still talking about it! So a huge personal thanks to him from me – he absolutely made an important conference a very enjoyable and memorable one. Priceless. I would highly recommend Greg to anyone wanting an uplifting close to their conference. Great value for money.” - Andy, Greencore Northampton

"All went well thanks, the boys were a big hit with the ladies, and Simon had a full dancefloor for his DJ set. All pretty easy to work with as well. Greg was superb, such a nice guy, he had a standing ovation when he came in after our intro !! I will definitely use him again if the relevant conference needs someone like that. Top bloke." - Bidford Events