Nicola Adams is one of the most inspiring and motivating Olympic speakers on the after dinner speaking circuit. Her story of pioneering victory in the ring, serves as an inspiration to young women and general audiences alike. Nicola created history at the 2012 London Olympic Games when she became the first female to win an Olympic boxing medal after winning Gold for the Flyweight category. Not only is she one of the leading female boxers in the world, but Nicola’s work outside the boxing ring is what makes her a truly remarkable figure within the sporting world.

Heavily involved in a number of vital campaigns and marketing fronts, Nicola is regarded to be one of the best Olympic speakers on the circuit. An expert in overcoming adversity, Nicola can apply her personal, life experiences to certain topics which allow her audiences to be gripped throughout her speeches. She is one of the all-time biggest success stories in boxing, and her story and success has seen a huge increase in female boxing participation. Nicola has made history in more ways than one, as in 2020 she became the first celebrity to perform in a same-sex couple on Strictly Come Dancing. The landmark move set the show on the right side of history, and is a testament to Nicola’s transformative influence. In November, Nicola was sadly forced to withdraw from the competition due to her partner testing positive for COVID-19.

Nicola, who is part of the LGBT+ community, topped the 2013 Pink List, further proof that she is a truly inspirational athlete, role model and idol to many young female athletes across the world. As someone who isn't afraid to voice their opinions, Nicola drive and determination for success is an admirable quality that increases her impact as an Olympic speaker. Often reflecting on a number of world related topics and issues, Nicola can captivate audiences with her moving speeches on LGBT+ inclusion and diversity. As a professional boxer, Nicola has a fantastic record of five wins, one draw and zero losses. Three of her wins have come by knockout with the other two wins being by decision. She was nominated for the 2012 BBC Sports Personality of the Year, following her never seen before efforts at the Olympics. She was appointed an MBE for her services to boxing in 2013, and was later made an OBE in 2017. When booked for events, Nicola can reflect upon her career, recounting the highs and lows of professional boxing that shaped her into the athlete that she is today.

Whether as a special guest, awards presenter or after dinner speaker, she will leave a resonating impact on audiences. Nicola Adams has created a legacy for female boxers to build upon, she has shown tremendous courage and belief throughout her career, whether it be in the boxing ring or fighting for what she believes in. Not only a sporting powerhouse but also an inspirational figure to many young athletes across the world, she is highly regarded as one of Britain's most inspiring athletes. As a speaker, Adams often discusses sporting success but also talks about overcoming adversity. 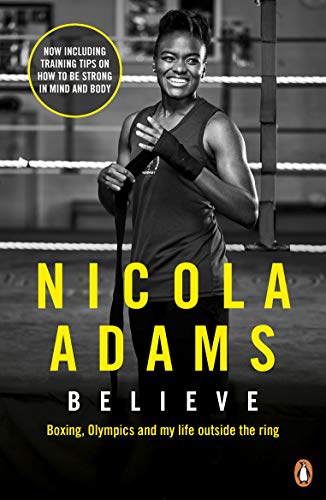 Believe: Boxing, Olympics And My Life Outside The Ring

How to hire Nicola Adams

Contact the Champions Speakers agency to provisionally enquire about Nicola Adams for your event today. Simply call a booking agent on 0207 1010 553 or email us at [email protected] for more information.

"I thought it was fabulous. She is truly remarkable and we were thrilled to have her" - Jonathan, Blackstone

"Fantastic! Nicola was open, honest and inspiring. It went amazingly well and we can’t wait to have her back." - Macquarie Group Services