Tim Collins is widely known as a retired British Military Officer, famed for the role that he played in the Iraq war in 2003. After delivering a speech about being ‘ferocious’ in battle and ‘magnanimous’ in victory, Tim’s words have since gone down in history as a famous speech to the 1st Royal Irish Battle Group of 2003, a famous opening speech that is now hung up in the Oval Office. After obtaining a degree in economics, Tim first began his military training at the Royal Military Academy Sandhurst. After completing his training, Tim joined the British Army as a second lieutenant for the Royal Signals. Working his way through the ranks of the Army, before long Tim was promoted to a Lieutenant with seniority and was also transferred to be a member of the Royal Irish Rangers, ultimately becoming captain. In 2001, Tim was given the honour of being appointed as the Commanding Officer of the 1st Battalion of the Royal Irish Regiment. Continually impressing military officials, Tim received the Queen’s Commendation for Valuable Service in reward of his efforts.

It was with the Royal Irish Regiment that Tim performed his greatest work. Now appointed as OBE for his efforts, Tim played a pivotal part in service during the Iraq wars of 2003 which became one of the most prominent moments of his military career. Tim has also been a part of the 2nd Battalion of the Royal Irish Rangers, commissioned for service in Berlin. Throughout his military career, Tim has helped in numerous high-profile operations such including the Sierra Leone hostage crisis and tours across the Falklands and Northern Ireland. Other roles include being an aid to the UN Chief of Staff and the Project Director of the Peace Support Training Centre. After experiencing such a diverse and demanding career, Tim has written Rules of Engagement: A Life In Conflict, a powerful memoir documenting his tales of service.

Leaving the Army in 2004, Tim has since focused his efforts on sharing the tales of his illustrious military career. He has appeared on Today on the BBC and on a Panorama special Forgotten Heroes. With a history of leading high-profile teams, Tim has been approached to stand as a member of Parliament since leaving the forces but has declined the offer. Tim has also channelled his interests into business after he became the Chairman of Pinpoint Corporate Services, a specialist security company. Today Tim is a highly sought public speaker, sought for his inspirational tales of military service. With a broad-ranging knowledge of not only military but political history too, Tim pairs such knowledge with his experience of Army service to deliver a unique and captivating speech. Having developed various skills during his time in the military, Tim is an expert on topics such as teamwork, leadership, peak performance, performing under pressure and mental resilience. With the knowledge that is transferable from Army life to corporate life, Colonel Tim Collins is the perfect choice for a range of corporate events. 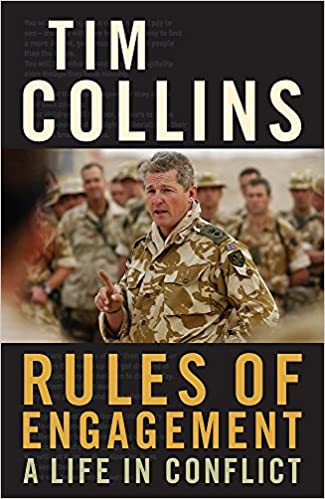 Rules Of Engagement: A Life In Conflict

How to hire Col. Tim Collins

Contact the Champions Speakers agency to provisionally enquire about Col. Tim Collins for your event today. Simply call a booking agent on 0207 1010 553 or email us at [email protected] for more information.

Tim is often booked as a speaker for corporate events, read his latest feedback below.

"Colonel Tim Collins OBE was the keynote speaker for our CIMA West Midlands prestige event ‘Inspirational Leadership for board members and aspiring leaders’, Tim was inspirational and provided great insight into his philosophy with some entertaining examples of where they have worked well and not so well in various military conflicts. Tim had the audience engaged throughout the speech for over an hour and provided some thought-provoking answers through the following Q&A session. It was also very pleasing to have a keynote speaker who was available for one to one discussions with our attendees in our after networking session, this provided a real personal touch and ensured our event was a great success." - CIMA Global

"Very well received by the audience - comments were that they found it very refreshing and inspirational." - Thales

"Our senior management has been cascading the messages down and I have heard several of them give direct quotes from Colonel Collins' presentation."  - Camelot Business

"Tim was the most popular part of the day. His speech really struck a chord and provided an incredible amount of perspective." - Deloitte

"Tim gave a very entertaining after-dinner speech which he pitched perfectly to our young people who were receiving awards for their completed apprenticeships. The adventures he recounted were put in perspective for the audience, providing real-life lessons with great humour. Highly recommended."  - TTE Training Ltd

"Inspiring, funny and above all practical about what gets people committed." - Shell

"In short he was fantastic; if we were a little younger some of us might be interested in joining the Royal Irish." - Liam, Senior Business Development Executive EMEA, Walkers Global