Baroness Tanni Grey-Thompson is one of the greatest Paralympian‘s to have represented Great Britain. Winning her first Paralympic medal in Seoul in 1988, Tanni has gone on to tally 11 gold, 4 silver and a bronze medal across five different games as well as breaking 30 track world records. She has begun to fulfil an impressive vocation as a motivational speaker, regularly speaking about peak performance, motivation and achievement. Tanni began using a wheelchair when she was just seven years of age, unfortunately suffering from the condition spina bifida.

Tanni worked to overcome the adversity that life had dealt her, never letting her disability stop her from achieving greatness. She found her love for wheelchair racing when she was only a teenager, found through experimenting with a number of different sports. She began properly competing in wheelchair racing when she was only 13 years old, before joining the British squad when she was just 17 years old. Most recently Tanni has been awarded an esteemed accolade in reward for her achievements as an athlete. At the 2019 BBC Sports Personality Awards Tanni was victorious, claiming the Lifetime Achievement Award.

This award is given to a special someone who has made a considerable impact on the world of sport during their career. Tanni has well and truly left an impact on the sporting industry, with her drive and determination to succeed being pivotal to every performance that she makes. An articulate and exceptionally gifted athlete, Grey-Thompson has increased her media commitments and she also formed part of the successful London 2012 Games coverage. A current member of parliament, Grey-Thompson has sat on the board for the London Organising Committee for the Olympic and Paralympic Games (LOCOG) and supported UK Sport in their endeavour.

Her vast knowledge and understanding of the industry and demands are exceptional and help her to deliver clear, eloquent and exquisite speeches as an Olympic speaker. A role model to the wider audience due to her determination, tenacity to achieve and succeed, Tanni Grey-Thompson has proven herself to be a desirable Olympic speaker. Her attendance at after dinner events and conferences as a motivational speaker has proven popular, increasing her suitability and desirability by all due to her exceptional stories and intrinsically driven persona. Lucid as a sports speaker and an exceptional addition to all events and occasions, Tanni Grey-Thompson is a desirable after-dinner speaker. 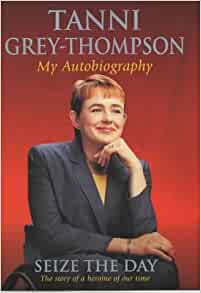 Seize The Day: My Autobiography

How to hire Baroness Tanni Grey-Thompson

Contact the Champions Speakers agency to provisionally enquire about Baroness Tanni Grey-Thompson for your event today. Simply call a booking agent on 0207 1010 553 or email us at [email protected] for more information.

"Very engaging and open about her experiences. She had some very clear messages. Tanni was also very funny, and giving of her time."- Leadership Foundation For Higher Education

"Tanni gave a real insight into what it takes to be a top athlete and to remain there for 16 years - an inspiration to all present." - Guinness

"The presentation was outstanding. A talk that met the aims of the conference. The audience were completely engaged." - Jewish Schools Conference

Tanni was great and her presentation very well received so overall a great result. Thank you to you and your team for helping make it happen. - Matt, MoD