Nirmal Purja MBE is the living embodiment of determination. The former military professional spent 16 years on the front line, fighting with both the feared Gurkhas and UK Special Boat Service. The experience taught him the power of perseverance, a mindset that resulted in his ever-growing list of record-breaking summits, as a historic mountaineer. Nirmal is booked to share his secrets of success, and teach audiences how to adapt, overcome and thrive in the face of challenges.

In 2019, Nirmal achieved the impossible – he reached the summit of 14 mountains in seven months. From the famous Mount Everest to the gruelling Makalu Mountain, he completed the mission alongside a team of climbers. In 2021 he was part of a small group who were the first to successfully climb K2 "Savage Mountain" during the winter. Nirmal set multiple World Records, including the fastest summit of the three highest mountains in the world, and credits the feat to his adaptability. Titled Project Possible, his adventure proved the power of human endurance, and inspired Nirmal to share his story with audiences. His experience was later immortalised by his book, Beyond Impossible.

Taking his mountaineering expertise and using it as a vehicle to help others, Nirmal started Nimsdai in 2020. The service offers 1:1 expedition guidance, and invites commercial participants into the world of exploring, under the supervision of a resident expert. Nirmal’s help ensures that safety is maintained, while also giving candidates the experience of a lifetime. Whether climbers want to enjoy the view or test their ability, he tailors the expedition to each participant.

Nirmal’s childhood dream was not to climb mountains, he aspired to become a Gurkha. In 2003, he joined the unit, and became the first Gurkha to fight with the Special Boat Service, based in the UK. While operating with the force, he sparked an interest in mountaineering, with his first successful peak being the Lobuche East. It was on the side of the mountain that Nirmal developed his #alwaysalittlehigher mindset, which has since become his defining legacy. He later led the first team of Gurkhas to climb Everest, a thrilling tale that Nirmal recounts at events. Nirmal was appointed MBE in the 2018 Queen's Birthday Honors List, for outstanding achievement in extreme high-altitude mountaineering - collecting his MBE from Windsor Castle in 2022. Most recently, Nirmal became the star of the Netflix film 14 Peaks: Nothing Is Impossible, a documentary in which he is followed on his journey to summit the 14 'Death Zone' peaks in just 7 months. In 2022 the 14 Peaks was added to the BAFTA Longlist, a fantastic achievement.

Characterised on the speaking circuit by his enthusiasm and positive energy, Nirmal leaves audiences feeling empowered. His speaking topics are driven by his passion for personal development, a core focus that grounds his speeches. Nirmal’s guests come away with a newfound lease of life, as he arms them with “a determined approach and positive mindset”. 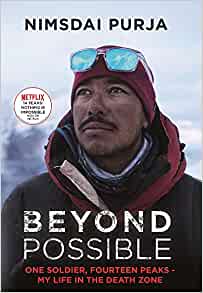 Beyond Possible: '14 Peaks: Nothing is Impossible'

How to hire Nirmal 'Nims' Purja

Contact the Champions Speakers agency to provisionally enquire about Nirmal 'Nims' Purja for your event today. Simply call a booking agent on 0207 1010 553 or email us at [email protected] for more information.

When appearing at corporate events, Nirmal is known to cover the following topics:

"Changing the entire concept of what’s possible. A beautiful account of the most testing missions. Nims’s ability to control his mind and achieve his goal shows us all how we can achieve our own goals. Nims also puts into perspective how SMALL many of our goals are... What Nims has done has truly been, one great leap for mankind." - Lucy