Mohsin is best known as the award-winning author of A Dutiful Boy. He is also a lawyer and advocate for LGBT rights, social mobility and racial equality and appears on leading broadcasters as a commentator and writes for several press outlets in the UK and abroad. As a speaker, Mohsin holds an open and honest discussion on several hard-hitting topics such as social mobility, mental health, diversity & inclusion, and representation. His speeches are perfect for organisations that want to learn about the importance of inclusivity and embed it as a core practice throughout their business.

He graduated from The University of Oxford with a degree in Law with European Legal Studies in 2007. He then held several internships at ICTY, Harvard University and the UK Ministry of Justice before becoming a Solicitor at Linklaters. In his four years with the company, he worked on several high-profile cases including investigations into FTSE 100 companies. In 2013 he became a Judicial Assistant at the British Supreme Court to Lord Sumption and Lord Wilson. He then became a barrister for 6KBW, a leading law firm specialising in white-collar crime. Mohsin was also a member of the Serious Fraud Office’s Prosecution C Panel and worked with the Metropolitan police on a public enquiry into undercover policing. He published The Little Book of Insider Dealing in 2018.

In 2020 he published A Dutiful Boy, in the memoir he discusses growing up in London, in a strict religious household as well as coming out as gay to his family and his career as a lawyer and advocate for equal rights. The book won the Lambda Literary Award and was named Book of the Year by the Guardian, GQ and New Statesman. Supporting the LGBTQ+ community he acted as General Counsel/Legal Director of Pride in London and was shortlisted for 'Most Innovative European In-House Lawyer’ at the Financial Times Innovative Lawyers Awards. He then became a Board Trustee at Stonewall. He was also listed as a Top Future LGBT Leader by the Financial Times and Attitude named him as a trailblazer changing the world. He is a regular commentator on Sky News as well as writing for CNN Style, The I Newspaper, Bustle, Mr Porter and Newsweek. In 2021 he joined Hakluyt as an Executive, advising businesses on risks and opportunities facing them.

Available to hire as a speaker Mohsin is perfect for any business that is looking for a discussion on inclusivity and the benefits it brings. His open and honest speeches draw on his own experiences and resonate with individuals from all backgrounds as well as leaving real-world strategies that organisations can use to embed diversity and inclusion in everything they do. 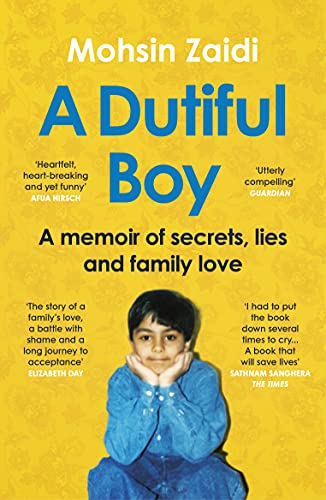 A Dutiful Boy: A memoir of secrets, lies and family love

How to hire Mohsin Zaidi

Contact the Champions Speakers agency to provisionally enquire about Mohsin Zaidi for your event today. Simply call a booking agent on 0207 1010 553 or email us at [email protected] for more information.

“Mohsin’s speaker session at Bain was incredibly powerful. We had an outpouring of positive feedback after the talk – from people expressing both their gratitude for having the chance to be part of an open conversation on critical intersectional topics, and their praise for Mohsin as a powerful storyteller. If you’re an organization that cares about DE&I and mental health you MUST get Mohsin to come for a session with your people.” - Som, Bain

"I hosted an event between PwC and NatWest where Mohsin talked about his book and the themes in it with PwC's Head of Client Experience…[it was] one of the largest events we have ever had in the Diversity and Inclusion space both virtually and in person. I have had a huge amount of positive feedback after the event that it was an incredibly important set of topics to cover (including social mobility and mental health) and that it was great that our company had taken the time to discuss them. Mohsin was a pleasure to work with - helped us prepare appropriately and spent a good amount of time with the facilitator to get her up to speed. He was brilliant on the day and helped us navigate through some difficult yet important questions. " - Susan, PWC

“Mohsin brought every bit of himself to the discussion and let the audience in on the conflict that was raging inside of him for a long time. He deeply moved his listeners and made them re-think what they can do to make their environments more inclusive. He is witty, thought-provoking, eloquent and worth every minute of your time" - Saleh, Blackstone

"I have engaged Mohsin as a speaker twice, once at BBC Studios for its Inclusion Summit in 2017 and again at The LEGO Group in time for National Coming Out Day in 2020. Mohsin is an engaging and charismatic speaker on D&I topics including social mobility and mental health, who gives his audience pause for thought and opens up valuable discussions within organisations. Mohsin's professional experience means he is a great collaborator in terms of designing a keynote session or panel discussion, and in both instances I've seen Mohsin tailor his content to specific audiences. The feedback on both his appearances has been excellent." - Charlie, LEGO Group

“We were delighted to have Mohsin talk to clients, partners and staff as part of a joint LGBT+ History Month event with Combar, Techbar and the Chancery Bar Association. Having read from A Dutiful Boy, Mohsin answered questions for nearly an hour – candidly engaging across many of the themes and stories so poignantly told in his memoir. He has a way of tackling difficult subjects such as mental health, intersectionality and class authentically, and in a completely non-preachy way. And he was a delight to deal with.” - David, Allen and Overy LLP

“It was an absolute pleasure to have Mohsin speaking at the Faculty. The event flowed like no other and the conversation covered so many relevant topics, I wish we had him with us for longer. One could see from the numbers and the kinds of questions we received how needed this conversation was and how inspirational Mohsin story is. He was brilliant and we hope he will consider coming back, once the pandemic is over, as he can definitely captivate an audience!”​ ​- University of Oxford Law Faculty

"A Dutiful Boy is utterly brilliant, and a conversation with Mohsin to get an even deeper insight into his experiences is even better than that. At Mental Health First Aid England we had an hour-long conversation. Mohsin answered our questions candidly and generously. I know from feedback that we got goosebumps, felt his pain and felt his joy. The sign of a brilliant conversation is wanting more when it finishes. I was left wanting more. - Simon, Mental Health First Aid England