Endurance athlete, Luke Tyburski has completed some of the world’s toughest challenges, pushing his mental and physical strength to the limits. From crossing deserts to completing triathlons, the former football player has faced no obstacle as great as his mental ones. Driven by his journey with mental health struggles, Luke uses his story to inspire others to overcome adversity and live a fulfilling life. The focus of much media attention, Luke’s speaking engagements have already had an influential impact on dozens of audiences, and he continues to be a sought-after speaker on mental health, motivation, and resilience.

The epic adventurer has competed in endurance challenges worldwide, that have seen him run, cycle and climb to success. From his feat in completing the Marathon Des Sables, in which he ran across the Sahara Desert, to finishing the double Iron Man in 35 hours non-stop, Luke knows how to push the limits of human performance. Not content with such impressive achievements, Luke has gone on to cycle the height of Everest, travel through a tropic Chinese forest unaided, and complete a 12-day ultra-marathon covering 2000 km. With such undisputed success, it’s hard to believe Luke has ever had adversity derail his goals, however, this is the reality of his story.

Driven and dedicated no matter his aim, Luke became a professional footballer after following his boyhood dreams. Playing around the world in iconic stadiums, Luke never thought his dreams would be halted, however, when his body couldn’t cope with the demanding routine, Luke suffered from binge eating and depression. After retiring from football, endurance challenges gave Luke a new focus, however, before long his demons came flooding back. Now, having faced his toughest challenge yet in the form of his mental health, Luke uses his story to educate others and inspire them to live as the best versions of themselves every day.

The subject of two award-winning films, Luke’s story has been featured in Triathlete Magazine, Outdoor Fitness Magazine and Multi-sport Magazine. For his achievements, he was named amongst the 50 Greatest Athletes in the World in 2016 by Forever Sports. Much of Luke’s current time is dedicated to coaching corporate teams and speaking engagements, using his story and lessons learnt to educate others. 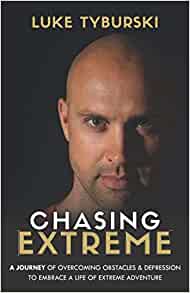 How to hire Luke Tyburski

Contact the Champions Speakers agency to provisionally enquire about Luke Tyburski for your event today. Simply call a booking agent on 0207 1010 553 or email us at [email protected] for more information.

When he's at corporate events, Luke's official speaking topics include:

“Luke came in to Richmond Park Academy after I’d contacted him through the Inspiring the Future website. He knew he was coming to speak with a range of students, and we had students from Years 7-11 attend his talk. The students were really engaged especially when Luke talked through some of his life changing experiences. What seemed to make the most impact was when Luke talked about how he used his moments of failure to reflect and find ways to improve. They were also really interested to note Luke’s passion for living life to the full and take chances, regardless of other people considering his plans impossible. I would recommend any organisation bringing him in to talk to students or adults alike. His stories of endurance and adventure are inspirational.” - Keira Pritchard, Richmond Park Academy

“Luke presents at our course regularly, and has been for 12 months now. He speaks with motivation and passion about his endurance challenges, and the room is clearly inspired as they listen and interact with him during his talks. Luke is easy to listen to, captivates his audience, and gives empowerment to those in front of him. I highly recommend Luke as a motivational, educational, and inspiring speaker.” - Matthew Snedden, Legacy Education Alliance, Inc.

“Luke spoke at the National Triathlon Show and was well received by all who attended. His story of how he planned, completed and recovered from his incredible feat is gripping from start to finish. His 30min talk was well paced, clearly delivered and broken up neatly with short videos to add context and colour to his presentation. In short, a thoroughly enjoyable, humorous and inspiring account of an incredible feat of endurance.” - Liz Barrett, 220 Triathlon Magazine.

Luke’s presentation was extremely interesting and provocative. He really made us think and challenge the way we perceive everyday situations. It’s great to listen to someone who’s really passionate about their speaking topics and clearly implements his own learnings.” - Kaari Kink, Energise Me Project Support

“Luke Tyburski has a background that justifies his position as a leader in promoting a positive mindset to get you through any situation. His emotive stories and powerful strategies should be experienced by all. Attitude changes everything, and Luke’s positivity is infectious.” - Mike Burt, Founder One Performance UK