Starting his illustrious career as an actor in the first two series of Byker Grove for the BBC alongside Ant and Dec, Caspar Berry was fortunate enough to attend Cambridge University to read Economics and begin his journey into business.

Becoming a professional film writer out of university, Caspar had his first-ever screenplay produced by Film Four, before going on to write for the likes of Miramax and Columbia Tri Star at the young age of 23. However, aged 25, Caspar took the dramatic life-changing decision to become a professional poker player in Las Vegas.

During his time in the gambling limelight of Las Vegas, Caspar learnt many of the lessons he now delivers to the business world as a motivational speaker. Returning to the UK in 2002, Caspar formed Twenty-First Century Media and soon grew it into the fastest growing audiovisual firm in the North East, later selling it to Bob Geldof’s media giant, Ten Alps.

During talks as a motivational speaker, Caspar speaks on the inspiration and consequences of their life actions, and how it has shaped your life. Learning from experience, Caspar seeks to teach audience members how to mould your life actions into a positive and beneficial outcome.

Caspar began to talk as a motivational speaker whilst still at Twenty-First Century Media, in an attempt to act as a catalyst for new thinking and innovative enterprises across the nation. With talks as an after-dinner speaker full of intriguing scenarios that allow audience members to consider the risks they take in their own lives.

As a professional motivational speaker, Caspar has now delivered well over 1,000 speeches to over 200 companies including HSBC, KPMG and Google. Utilising an exciting mix of poker, business and experiences from his life, Caspar is an ideal personality to address business and social environments alike.

Contact the Champions Speakers agency to book Caspar Berry for your event today. Simply call a booking agent on 0207 1010 553 or email us at agent@championsukplc.com for a free quote.

"Caspar is an inspirational speaker but does it with content and delivery that captures the imagination and challenges the audience to really think in a different way. His delivery is interactive, entertaining and very thought provoking and is fantastic for delivering a great session with a difference." - Sian Doyle, Director of Retail, Orange

“An extraordinarily powerful message for leaders. It’s credible, relevant and demands immediate attention from leaders who, by being too scared to fail in the short term, risk their long term success.” - Mike Wilsher, Managing Director, The Executive Foundation

"Made me realise what has stopped me developing my own potential. A 'light bulb' experience!" - Sarah Crookes, Business Manager, Nottingham Community Housing Association 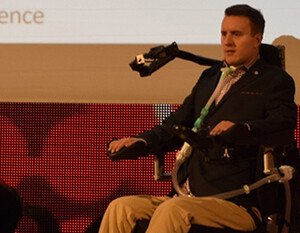