Barbara Cassani is an American businesswoman. She was the founder under British Airways of budget airline Go Fly and was the first leader of London’s bid for the 2012 Summer Olympics. A leadership speaker and business expert, Cassani knows exactly what is ned for efficient and effective leadership of corporations. In 1997 Barbara was selected by BA to start up budget airline due to the increasing competition from budget airlines Ryanair and EasyJet. She was given a £25 million in seed capital and ’Go’ was the product. The company began operations in 1998 and started making profit 2 years later.

In 2001, Barbara led a management buyout of the company and became the first Chief Executive. Barbara was bitterly opposed to the buy out of ’Go’ by rivals EasyJet in 2002. Barbara's experience of corporate management of the highest level makes her a pre-eminent business speaker and authority on the leadership speaker circuit. Earlier that year she had won the Veuve Clicquot Businesswoman of the Year Awards, but was not offered a job during the buy out. Instead she decided to release a book detailing her experiences at Go; 'Go – An Airline Adventure’ which won a number of business publishing awards the following year.

Barbara then went on to be appointed to chair London's bid to host the 2012 Summer Olympics in June 2003. She led the bid through the first phase of the two-stage bidding process. During her tenure the newly formed bid corporation blossomed and grew to a staff of 80, with many large institutional and corporate backers, the bid gained increasing buy-in from a skeptical British public and political class. The spark behind one of the most influential games of our time, Cassani has shown she has the talent to back her advice as a keynote speaker.

Barbara's team created the bid’s master plan, detailing where all the events would be held, what infrastructure would need to be built, and provided the overall budget projection for the games. This was submitted to the International Olympic Committee in the spring of 2004, and on the strength of it London was selected as one of the five candidate cities and went on to win the selection process in July 2005 and of course won the bid a few years later. An ideal personality to deliver talks as a keynote speaker, Barbara is a consummate professional who enjoys the challenge of transforming business structures to provide definitive leadership. Barbara provides an inspiring insight to leading large corporations and motivates others with her direct, enlightening informative technique. 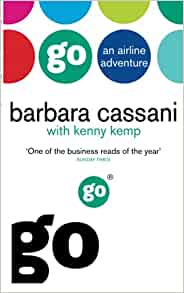 How to hire Barbara Cassani

Contact the Champions Speakers agency to provisionally enquire about Barbara Cassani for your event today. Simply call a booking agent on 0207 1010 553 or email us at [email protected] for more information.

"She delivered a refreshingly candid and good humoured presentation that captivated our audience." - Ernst & Young