With a childhood dream of being a stand-up comedian Rod Woodward, son of Welsh sports writer Keith Woodward, has assumed he would follow in his father’s footsteps; a chance encounter however gave Rod the opportunity to act as the warm up act and comedy speaker for Welsh TV talk shows, provided him with the chance to hone his talent and build his fan base.

Starting his comedian career by taking a year out of university Woodward quickly found himself touring across Wales performing gigs to ever increasing audience numbers. Now a world renounced comedian Woodward has worked alongside some of the biggest names in comedy; supporting Paddy McGuiness on his 110 show UK tour and not only appearing before but mimicking the globally popular cult comedian Joe Calzaghe in Las Vegas.

As well as headlining his own shows Rod has also established himself as a popular choice for comedy speaker at corporate events; clients have praised his performances and stage presence, applauding his timing and material as well as his personality and personal charm.

How to hire Rod Woodward

Contact the Champions Speakers agency to book Rod Woodward for your event today. Simply call a booking agent on 0207 1010 553 or email us at agent@championsukplc.com for a free quote.

"Rod Woodward is one of the fastest rising comics in Great Britain, A young Dave Allen" - Peter Kay

"The best comedian we have ever used" - Barclays

"Rod was perfect for our corporate clients and his delivery was superb. Very talented and a very nice person to deal with" - HMV 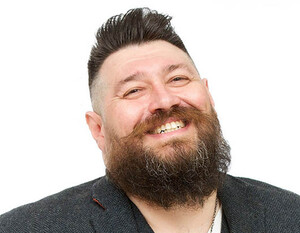