As the co-founder of Innocent Drinks, Richard Reed created an international retail powerhouse through the very basic principles of producing fresh fruit smoothies and vegetable pots. A fantastic retail and keynote speaker, Richard focuses on key topics of entrepreneurialism and leadership as factors for success in highly competitive markets, an essential insight at industry events. Best known for his unique packaging, he shares his expert methods for branding, marketing and advertising, tailored to making corporate audiences stand out from the crowd and build profits. From humble beginnings to a worldwide retail mogul, Richard's after dinner speeches retell his thrilling personal story of growth.

During talks as a guest speaker, Richard often discusses the spontaneous style in which his business empire was created. Innocent Drinks began after Richard and his two friends graduated from Cambridge University, and decided to set up a fresh fruit company. After six months of recipe improvements in their kitchens, Innocent Drinks was born and debuted at a music festival. With two bins labelled YES and NO placed outside their stall, and a sign asking "should we give up our jobs to make these smoothies?", Richard conducted a unique customer survey. By the end of the day, the YES bin had been filled and the trio resigned from their jobs the very next day. Such decisive action is essential to success, a topic that Richard discusses at length as a business speaker.

Over a decade later, Innocent’s turnover was in the hundreds of millions of pounds, selling in thousands of stores across the country. With all three of the original owners selling their stakes in the firm in 2013, after Coca-Cola increased their shareholding, Innocent Drinks took to the international stage. Such industry fame allows Richard to share his story with thousands of others, and encourage the entrepreneurial spirit across the world. Richard is now the co-founder of JamJar Investments, helping companies with his vast knowledge. Additional positions include as a presenter on Be Your Own Boss, the founder of Art Everywhere and the co-founder of the Innocent Foundation.

Winner of a multitude of awards, Richard has been honoured with several accolades, including the Ernst & Young Entrepreneur of the Year, Business Link for London Best Marketing Campaign, National Business Awards Best Marketing Campaign, Shell LiveWIRE, Orange Innovative Company of the Year and a CBE in 2016. From Britain's Greatest Business at ITV’s Great Britons Awards, Most Admired Business Leader by Marketing magazine to the National Business Awards’ Small/Medium Business of the Year, Richard and his company's industry-defining influence has been celebrated with countless awards.

With years of expertise, Richard published If I Could Tell You Just One Thing… Encounters with Remarkable People and Their Most Valuable Advice in 2016. From the sales, he donated large amounts of money to five mentoring and social inclusion charities, a testament to Richard's passion for good causes. During talks as a keynote speaker he engages with audiences, encouraging them to add creativity into their everyday business lives. With such a unique approach to business, corporate audiences are inspired to embrace innovation through Richard's story. 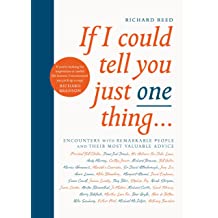 If I Could Just Tell You One Thing... Encounters With Remarkable People And Their Most Valuable Advice

How to hire Richard Reed

Contact the Champions Speakers agency to provisionally enquire about Richard Reed for your event today. Simply call a booking agent on 0207 1010 553 or email us at [email protected]ampionsukplc.com for more information.