Nick Fry is the former CEO and co-owner of Mercedes Formula One. He is a well-established motorsport and keynote speaker with a wonderful personality and great business knowledge. Fry is known for his wonderful anecdotes and humour in which he expresses throughout his time as a speaker. He is currently the Non-Executive Chairman at McLaren Applied.

He has a long career within the automotive industry and began his career with Ford in 1977. He briefly spent time at Aston Martin before returning back to Ford in 1995. When he returned to Ford, Fry featured on BBC's Watchdog where he defended the companies handling of a recent situation. His first major role within a company came in 2001, he became the Managing Director of Prodrive. Fry started to develop his business management skills and strategic leadership qualities, two topics he often discusses as a speaker.

Fry's first involvement in Formula One came in 2002 when he was appointed Managing Director of BAR F1. 2006 saw Fry achieve his first Grand Prix as managing director, Jenson Button won the 2006 Hungarian Grand Prix and this will be one of Fry's most memorable moments throughout his career. Fry often discusses how to build high performance teams, just like he did with BAR F1.

2013 saw Fry become the CEO of Mercedes F1. becoming the CEO of one of the largest motorsport organisations in the world. He enjoyed a hugely successful period at the company, he was responsible for leading the Mercedes team to their first ever F1 and World Championship. His ability to maximise return on investment and make decisions ensured Mercedes were successful throughout his tenure as CEO. He has great business knowledge but also knows motorsports extremely well.

As a speaker, Nick Fry possesses fantastic charisma and humour, he often discusses in detail topics such as strategic leadership, hiring and retaining the best people and building world class teams. Also, he shares many stories and anecdotes from his F1 career.

Learn about Fry's favourite track and his top tips for breaking into Formula 1, in our exclusive interview with the motorsports legend. 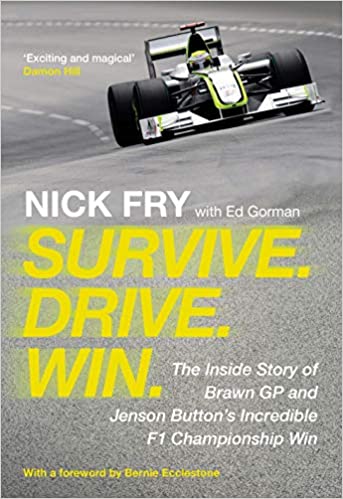 How to hire Nick Fry

Contact the Champions Speakers agency to provisionally enquire about Nick Fry for your event today. Simply call a booking agent on 0207 1010 553 or email us at [email protected] for more information.

When he's at corporate events, Nick Fry is known to cover the following topics:

Without 15%+ performance improvement annually a F1 team slips down the grid. Nick explores how to generate a culture of continuous improvement, fast problem resolution and how great ideas can come from anywhere in an organisation. Managing the best people and instilling a culture where boundaries of technology and process are tested whilst also reacting appropriately and with a developed containment actions when inevitably something does not go to plan.

F1 teams are masters of speed on and off the track. Nick discusses how to manage change of circumstance, technological, cultural and organisational change emphasising the role of leadership, clear objectives, effective delegation and communication. His wide experience in mainstream car companies, early stage organisations as well as in F1 allows him to relate to the challenges faced by all organisations and propose practical solutions to management teams.

Nick draws on his own stellar career in the sport and gives an accessible explanation of how an F1 team operates and how the top teams are consistently successful. He then explains how those practices can be utilised in any business, regardless of sector. This provides a fresh perspective and new ideas to invigorate any company meeting or client conference.

Nick is often booked to speak at events, read his latest feedback below.

"He's fantastic- it's a really interesting story, and we loved the 'behind the scenes' feel. He also went above and beyond to tailor some of the talking points to align to our own value props- so all in all... a great session" - Leslie