Neil Fachie OBE was born with a degenerative eye condition known as Retinitis Pigmentosa. His sight loss has played a constant factor throughout life, helping him to develop his problem-solving skills, adaptability and resilience. Neil became a full-time athlete in 2006, following his graduation from the University of Aberdeen. Taking up athletics at the age of 24, Neil quickly displayed his raw talent for the sport, and has since gone on to mark his name firmly in the Paralympic history books. Now an accomplished speaker and coach, Neil is booked for a range of corporate events to share his sporting success story, along with topics such as overcoming limiting beliefs, performing under pressure, creating a champion mindset, goal setting and overcoming adversity.

A brief spell with British Athletics led to Neil representing Paralympics GB at Beijing 2008 in the 100m & 200m. A disappointing Paralympic debut led to Neil losing his funding. Despite such adversity, he realised that the only way to achieve his dreams was to reinvent himself. He joined British Cycling in 2009 and made rapid progress, later that year becoming a double World Champion and double World Record holder.

His ambition was realised in 2012 when on home soil he won Gold at the London Paralympic Games in the Tandem B Kilo. This also led to him receiving an appointment of MBE for Services to Para-Cycling the following year. Having claimed an impressive 14 Track World Championship Gold medals, five Track World Championship Silver medals and four Commonwealth Games medals, it comes with no surprise that Neil has also been able to claim two Olympic Silver medals, and in 2021 Neil claimed another Paralympic Gold in the B 1000m time trial at the 2020 Tokyo Paralympic Games. Neil has since also been an Ambassador of Aberdeen FC Community Trust and was appointed OBE for Services to Cycling in the 2022 Birthday Honours.

In 2017, Neil and his wife Lora co-founded LNF Coaching. They both passionately believe that there are tremendous possibilities when the worlds of sport and business combine. Their aim is to use the insights and lessons learned from the world of elite sport and use them to help their clients achieve their full potential. The goal is to help business leaders face their limitations, frustrations, pain and setbacks, and rise above them to achieve a personal best or world record of their own. In accompaniment with their coaching company, Neil has also authored the book Earn Your Stripes: Gold Medal Insights For Business and Life, and also delivers inspirational keynote speeches under the consultancy Earn Your Stripes. Neil is also now an Accelerator Coach with Dent Global and an Independent Board Member of the 2023 World IBSA Games Stakeholder Board.

When looking for a speaker who is an expert on overcoming limiting beliefs, goal setting, creating a champion mindset, taking the next step in career performance, performing under pressure and overcoming adversity, look no further than Neil Fachie. Sharing his impressive career journey with audiences, Neil is perfect for everything from inspirational school visits to in-depth tutorials with corporate clients. No matter the requirements of the event, Neil tailors his speech to suit. When looking for a passionate and driven sports speaker for your next event, book Neil Fachie today. 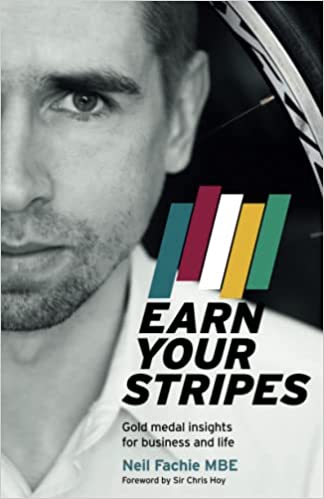 Earn Your Stripes: Gold Medal Insights For Business and Life

How to hire Neil Fachie

Contact the Champions Speakers agency to provisionally enquire about Neil Fachie for your event today. Simply call a booking agent on 0207 1010 553 or email us at [email protected] for more information.

When Neil's at corporate events, he is known to cover the following topics:

Read what people had to say about Neil when he appeared at their corporate events:

"I'd certainly highly recommend Neil. I think the Earn Your Stripes model is very well thought through. He is hugely motivational and with a focus on topics such as drive and performance, business teams really can get a lot from his model. There are takeaways for everyone" - Ian, Partner, Business Services Corporate, Hill Dickinson LLP

"It was fantastic! The feedback has been amazing. Thank you" - Andrea, Events Manager, Primis Mortgage Network

"Neil had the room on the edge of their seats from the start of his presentation. We could tell by the reception in the room, and via social media since, that everyone loved hearing Neil’s story and how he manages his mindset prior to, during and after big events. I am sure that many will start to apply something similar in their own lives as well!" - Amanda, Organiser, K-Club

"I just wanted to drop you a line to say many thanks again for your session last week to the team. Not only are your achievements inspirational but you presented them in an engaging, clear and relevant manner."  - Lee, Head of Claims, Allianz (UK)

"Thank you for taking time out of your busy schedule to be a presenter at our Gold Award Presentation last week. I am sure that the young people and their parents were inspired and enthused by your contributions on the day. We have already heard from recipients and their families about how special their day at the Palace was. You played no small part in making the day memorable for them."  - Barry, Director - DofE Scotland