Aged just 12, Louie began his career as a TV, stage and film actor, and to this day has appeared in over 30 TV commercials. He began his career with Walt Disney back in 1987, after being offered a summer job with the company. From then, Louie forged a successful career with the Walt Disney Company, originally working as a comic at Disney before designing award-winning customer service campaigns and entertainment experiences at the Disney parks. During his time at Disney, Louie was awarded The Disney Partners in Excellence Award and The Spirit of Disney Award, a testament to his revolutionary work with the company.

After leaving Disney, Louie has established a successful career as a customer service consultant. He has designed the programme Being SkyTouch and worked with organisations such as Nikon, Choice Hotels, The American Council of Independent Laboratories and Microbac Technologies. Also during his time with Disney, Louie was a member of the opening team of the World of Harry Potter, a member of the redesign team of the Traditions Programme for The Disney University and on the design team for Disney’s Guest Satisfaction Measurement System.

Now booked as a leading customer service keynote speaker, Louie has worked with companies such as the Bank of America to establish results-generating customer service campaigns. With countless years of designing and developing presentations at Disney, Louie has presented The Best Way To Get There for EXXON Co and Own It! for ING Financial. Covering topics such as there is no business but show business, practical steps to magical service moments and service is a superpower, book Louie Gravance for an informed speech on award-winning customer service. 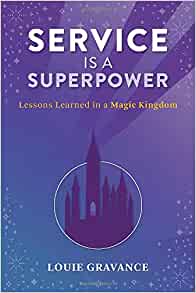 Service Is A Superpower

How to hire Louie Gravance

Contact the Champions Speakers agency to provisionally enquire about Louie Gravance for your event today. Simply call a booking agent on 0207 1010 553 or email us at [email protected] for more information.

Louie is often booked as a speaker for a range of corporate events, read his latest feedback below.

"The feedback we got on Louie was overwhelmingly positive from everyone at the conference. His energy and insights were exactly what we needed. Louie was incredible" - Conference Chair, The New England Association of Amusement Parks and Attractions

"Louie is absolutely AMAZING. Everyone loved him. Not surprisingly, he has an amazing presence and was wonderful to listen to and watch" - Shemar, Director of Franchise Marketing and Development, SweetFrog

"You have the remarkable and uncommon ability to use your natural skills in humour and drama to clearly convey the more serious parts of your presentation. You entertained us, but you also used the fact that you'd gotten our attention to drive home key concepts in your presentation. That's a rare skill, you were astonishingly good!" - Elizabeth, Rochester Institute of Technology

"We were so impressed with Louie's presentation and its relevance to our own customer service... our nearly 1800 customer service associates were treated to a lively, humourous and uplifting presentation" - Kim, Executive Vice President of Customer Service Operations, Mutual of Omaha Co.

"Louie is an extraordinarily gifted individual who has the capacity to touch the minds and hearts of a room full of sceptical individuals and change their mindsets in one hour and twenty minutes! What a feat!" - Kathy, Regional Director of Stores, Kids R Us