Lord Kim Darroch has enjoyed a successful and decorated career in politics, having formerly worked as the British Ambassador to the United States and the UK Permanent Representative to the European Union. Now retired from his career as a UK Civil Servant, Kim is an expert on all things policy analysis and government affairs. Using such expertise, Kim is now booked as a speaker for a range of corporate events, sharing his expertise on topics such as the Ukraine crisis, Britain in the European Union, British national security and America.

Back in 1977, Kim first joined the Foreign and Commonwealth Office, shortly appointed to the Diplomatic Service. His first major role saw him serve as the First Secretary in Tokyo before becoming the Desk Officer for the Channel Tunnel project. Since then, Kim has been the Head of the Cabinet Office European Secretariat, British Permanent Representative to the European Union and National Security Advisor to then Prime Minister David Cameron. In 2016, Kim became the British Ambassador to the United States, replacing Peter Westmacott in the Foreign Office. During his time as the National Security Advisor, Kim worked on everything from Russian aggression in Ukraine to government collapse in Libya.

Other prominent roles of Kim’s have included EU Adviser to then Prime Minister Tony Blair, Private Secretary to the Minister of State for the Middle East, Head of the News Department at the Foreign and Commonwealth Office and Head of the Adriatic Department during the Dayton Accord negotiations. Kim has also completed tours across the breadth of Tokyo, Brussels and Rome and featured on international news broadcasts for GB News, CNN and Channel 4. Kim has also gathered many honours throughout his career, appointed as CMG in 1997 and KCMG in 2008. He was also made Life Peer Baron Darroch of Kew of St Mawes in the County of Cornwall. He is also the author of Collateral Damage: Britain, America and Europe in the Age of Trump and Chairperson of Best for Britain.

Using his background in policy analysis and government affairs, Kim is now highly sought after as a speaker for public speaking engagements. Regarded as an authoritative commentator across media channels and published media, Kim is renowned for his expertise on various national security issues and European policy. When booked as a speaker, Kim is able to cover topics such as the Ukraine crisis, Britain in the European Union, British national security and America. Whether he be delivering a speech or conducting interviews with a host, Kim is personable and authoritative on all subjects he covers. When looking for a professional and eloquent politician to speak at your next event, don’t hesitate in booking Lord Kim Darroch today!

We were thrilled to conduct an exclusive interview with Lord Kim Darroch! Watch the video to hear his thoughts on cybersecurity and geopolitics. 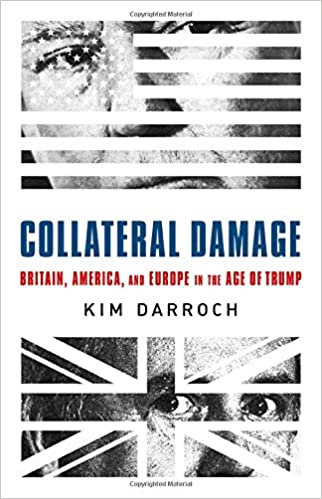 Collateral Damage: Britain, America and Europe in the Age of Trump

How to hire Lord Kim Darroch

Contact the Champions Speakers agency to provisionally enquire about Lord Kim Darroch for your event today. Simply call a booking agent on 0207 1010 553 or email us at [email protected] for more information.