Former Director for Harley Davidson, Ken Schmidt is a customer loyalty expert, author and in-demand speaker focussing on communications. Whilst working for the company, Ken discovered the importance of customer relationships and loyalty and assisted one of the most successful turnarounds in corporate history. Known for his stimulating and forthright voice, Ken is a leader in business and transformation.

Ken’s wealth of experience began in his position as former Director of Communications for Harley Davidson. While working for the company, he was responsible for one of the greatest turnarounds in the history of business. After taking their position as leader in the market lightly, in the face of newer, cheaper alternatives, Harley lost their market share dramatically and were later declared bankrupt. The company went through trial and error to resolve the issue, but with Ken at the helm, the need to re-connect with lost customers was recognised. Ken played a huge role in restoring Harley Davidson to the high-end, luxury model of bikes we now see.

Later on in life, Ken went on to enjoy an influential position working within a marketing firm called VSA. After many successful years, he then sold his shares within the company to pursue his dream of public speaking. It is the process behind what he has achieved in business that makes up a significant proportion of Ken's talks and makes him a hugely popular after dinner speaker. His anecdotes and messages are an inspiration to many with his talks Make Some Noise: Open the Throttle & Dominate Your Marketplace and Thrive Among Thorns: Untapped Growth Opportunities for Financial Services proving to be very popular. Ken has also authored Make Some Noise: The Unconventional Road to Dominance, penning his effective theories toward dominating market competitors.

Most recently, Ken likes to speak out to businesses and academic groups sharing his knowledge among guests at corporate events. A truly remarkable character, Ken has an interesting take on building relationships and the unorthodox nature of his techniques are what makes him such a successful authority within the communication world. Hire Ken Schmidt today to put a spark back into your business journey! 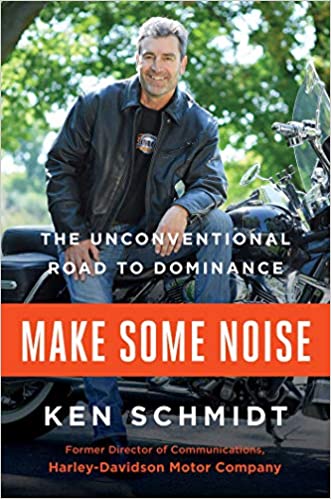 Make Some Noise: The Unconventional Road to Dominance

How to hire Ken Schmidt

Contact the Champions Speakers agency to provisionally enquire about Ken Schmidt for your event today. Simply call a booking agent on 0207 1010 553 or email us at [email protected] for more information.

Ken is known to speak on the following topics:

Your message, tone, and energy were just the ticket. Great comments. We are just thrilled. - The Center For Health Design

You were a huge hit and the overwhelmingly positive comments focused on the relevance of your content and the energy/passion/humor of your delivery. You carried the show. - PTC Sales & Distribution

One of the best speakers we’ve had in the history of our conference. Blended enthusiasm, charisma and a unique business perspective for a powerful presentation that took a wrecking ball to the way businesses look at themselves and market their products. - Illinois Corn Growers Association