An engaging sports speaker, whos has spoken to audiences of 500 people, John Rowbotham is popular for sport and corporate dinners. Owing to his experiences of refereeing at the highest level as a FIFA referee, in games that included World Cup qualifiers, Premier League matches, SPL fixtures and the 2005 Scottish Cup Final between Celtic and Dundee United, John is renowned both in Scotland and Europe.

Having officiated thirteen Old Firm derbies, as well as 50 international fixtures, John is a well-known statesman of Scottish football. He is still fondly remembered today for his exploits in the game in Scotland and further afield.

Having delivered speeches for gala events and corporate dinners for St Mirren FC, Dundee United and East Fife, as well as presented at events such as the all-time great awards in Kirkcaldy and the Central Amateurs dinner in Motherwell, John is extremely well-received at award ceremonies and corporate occasions. He has also been called upon to speak at sportsman's dinners including for Ayrshire Hospice and events for amateur clubs, both junior and senior, including Camelon Juniors.

In addition to his speaking engagements, John has offered his insight to SPL fixtures as part of his punditry role with Setanta Sports.

Famous for his 6 ft 3 frame and shaved head, John was undoubtedly a fan favourite during his time in Scotland. Often remembered for the good, he also was involved in the controversial. Some supporters remind him of his failure to send off Paul Gascoigne for a series of fouls that included leaving an Aberdeen player needing stitches. Two years later, he rectified his mistake, sending Gascoigne off in an Old Firm Derby.

A passionate, knowledgeable and likeable after dinner sports speaker, John recounts his experiences of officiating at the highest level, in what makes for a fascinating evening's entertainment. Also able to support teams and individuals hoping to better their ability to deal with pressure and manage discontent, John is the ideal speaker for business conferences or gala dinners and award ceremonies.

How to hire John Rowbotham

Contact the Champions Speakers agency to book John Rowbotham for your event today. Simply call a booking agent on 0207 1010 553 or email us at agent@championsukplc.com for a free quote. 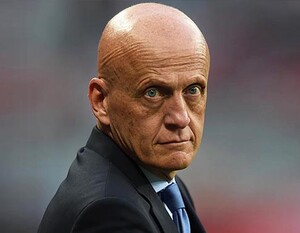