Fatima Whitbread is a former world champion javelin thrower who successfully won silver and bronze at the 1988 Seoul Olympic Games and 1984 Los Angeles Olympic Games. Aside from her history in sport, Fatima also holds a reputation as an event host and after her long sporting career, she has pursued a career within after-dinner speaking. One of Fatima’s greatest achievements is when she broke the javelin world record, with an astonishing throw of 77.44m at the 1986 European Championships. Due to such an incredible performance at these events Fatima was crowned the BBC Sports Personality of the Year award.

Fatima continued to thrive and succeed within her sport, next winning a silver medal at the 1983 World Championships. During her time competing in Javelin, Fatima built a budding rivalry with Tessa Sanderson, something which motivated them both to work hard and to push themselves to the limit. Fatima has also found herself starring on television shows. In 2009 she appeared on the celebrity version of Total Wipeout and then featured in Celebrity Come Dine with Me in 2011. Later in that year, Fatima also featured on Who Wants to Be a Millionaire on the Christmas time edition. Fatima has also starred in a number of game shows as well, such as Pointless Celebrities in 2012, Olympians edition of The Cube in 2012, Celebrity Blockbuster in 2014 and Eternal Glory in 2015. Most memorably, Fatima featured in the 2011 series of I’m A Celebrity… Get Me Out Of Here!.

Fatima finished in third place on I’m a Celebrity… Get Me Out Of Here!, narrowly beating fellow campmate Anthony Cotton to the spot. This stint on the popular reality show gained Fatima a great deal of attention from the public eye, subsequently leading to her landing a succession of other roles when returning from the show. Eloquent, articulate and concise in her role as a sports speaker and Olympic speaker, Fatima Whitbread is well known for her intrinsic motivation; overcoming severe adversity and not using it as an excuse for failure. Her grit and determination is undoubtedly the predominate catalyst towards her successes as an after-dinner speaker. 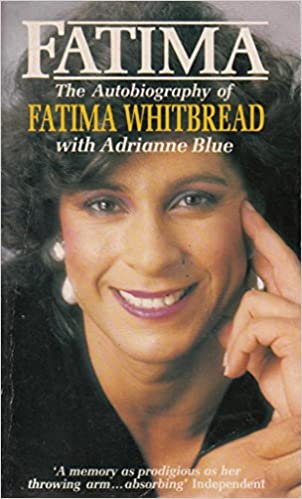 Fatima: The Autobiography Of Fatima Whitbread

Survivor: The Shocking And Inspiring Story Of A True Champion

How to hire Fatima Whitbread

Contact the Champions Speakers agency to provisionally enquire about Fatima Whitbread for your event today. Simply call a booking agent on 0207 1010 553 or email us at [email protected] for more information.