Acclaimed comedian, journalist and TV presenter, Dom Joly is best known as the star of Trigger Happy TV, an internationally popular hidden camera show that was sold to over seventy countries worldwide. A hilarious individual that brings a room to life, Dom Joly is a superb addition to any event, function or corporate after dinner event. Initially recruited to work as a producer on Channel 4’s political discussion programme ITN’s House to House, he soon went on to work for The Mark Thomas Comedy Product as a result of his political knowledge.

After Dom created his own show, War of the Flea for the Paramount Comedy Channel, he discovered his love and talent for comedy. This was when he decided to develop the brilliant and much loved Trigger Happy TV. The highly popular TV show went onto be a worldwide success and was nominated for three British Comedy Awards, and won the Silver Rose of Montreux, the BBC Two Award for Best Comedy and the Loaded/Goodfella Comedy Newcomer of the Year.

As a highly intellectual and multi-talented individual, Dom has also written for a number of publications such as the The Independent, where he wrote a spoof column called Cooper Brown: He’s Out There. Furthermore, he also published a number of books including the travel books, The Dark Tourist: Sightseeing in the World’s Most Unlikely Holiday Destinations and Scary Monsters and Super Creeps.

As a result of his wide knowledge on travel and other cultures, Dom became a special correspondent for The Independent at the Beijing Olympics as well as featuring on BBC Radio Five Live’s Drive programme, where he gave the latest updates from Beijing. A creator of some of the most hilarious sketches and jokes and has previously been stated as ‘the funniest man in Britain’, Dom will provide pure entertainment to any event he attends, whether it's to host or as an act, Dom will make the event one to remember.

Contact the Champions Speakers agency to book Dom Joly for your event today. Simply call a booking agent on 0207 1010 553 or email us at agent@championsukplc.com for a free quote.

Take a look at the feedback Dom has received for the events in which he appeared:

"Friday went really well, Dom did a great job and our staff were really surprised! Thanks for all your help in arranging. I will definitely come back to you for future events." - Focus Group

"It was great, everyone enjoyed the evening. And we have some great photos of our winners with Dom. Thanks for everything."
- Gamma 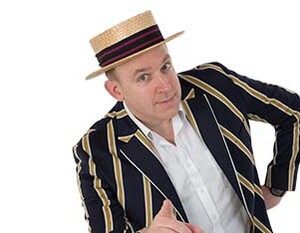