Chris Voss has led a life filled with tension, danger and high stakes. As a former FBI hostage negotiator, Chris has transferred the skills learnt on the frontline of fear, into insightful content for corporate clients, training others how to achieve the negotiation balancing act in a business environment. Weaving experiences from his own fast paced career into his public speaking, Chris engages and educates audiences of his interactive keynote speeches.

For over two decades, Chris worked with the FBI Crisis Negotiation Unit. Using his calm, calculated, focused nature, he safely returned hostages from dangerous situations, spending his last four years as the FBI’s chief international hostage and kidnapping negotiator. At the forefront of cases on the Gaza Strip, and Iraq warzone and over 150 over cases, Chris found himself adapting in high pressure environments, a skill he has since transferred to his speaking engagements, sharing how audiences can achieve this in a corporate environment. For his impressive and dedicated career, Chris was given the Attorney General’s Award for Excellence in Law Enforcement.

Alongside his work with the FBI, Chris has held a number of high profile positions for corporations and governing bodies. After fgraduting with a Master's Degree in Public Administration from Harvard's Kennedy School of Government, he worked for the New York City Joint Terrorism Task Force where he gained his footing in the industry.In more recent years, Chris has lecturer at USC Marshall School of Business and is regularly sought after to commentate on major new outlets like CNN and Fox News as well as featuring in Forbes and The New York Times.

Equipped with decades of first hand experience in transferable skills, Chris founded The Black Swan Group in 2008, after retiring from the Bureau the previous year. The Black Swan Group offers expert training for businesses and individuals on how to achieve results and make businesses and life negotiation productive. As part of his coaching, Chris has conducted keynote speeches and seminars across the country, including his 2019 TEDx talk ‘Never Split The Difference’, also releasing a book by the same name, both of which cover the technique of tactical empathy.

Who knows more about negotiating a business deal than a former kidnap negotiator? Though the corporate world has significantly fewer hostages than a warzone, the same skills apply - a steady hand, a persuasive tone and a strong mind. As a speaker, Chris uses these skills to inspire corporate audiences, teaching them methods of communicating productively for desirable outcomes. 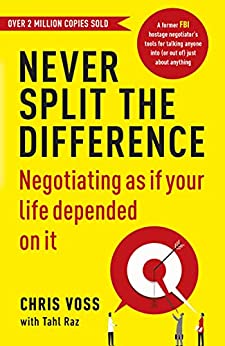 Never Split The Difference: Negotiating As If Your Life Depended On It

How to hire Chris Voss

Contact the Champions Speakers agency to provisionally enquire about Chris Voss for your event today. Simply call a booking agent on 0207 1010 553 or email us at [email protected] for more information.