Carl Miller is a leading expert in all things digital. He is the founding Research Director of the Centre for the Analysis of Social Media as well as a media commentator. He also wrote the award-winning The Death of the Gods: The New Global Power Grab. An experienced speaker who has conducted a TEDx Talk, Carl educates a wide variety of audiences on how the digital world impacts them, using data he has collected in his research.

Carl graduated from the University of Cambridge in 2008 before he completed a Masters at Kings College London. He works for cross-party think tank Demos, a group that works with various government institutions on policymaking. In 2012 he became founding Research Director of the Centre for the Analysis of Social Media (CASM) at Demos. CASM is the UK’s first think tank dedicated to the study of the digital world and has seen Carl co-author Truth, Lies and the Internet and The Power of Unreason among other reports into the way people’s lives are impacted by the digital world. He has also coined the term social media intelligence alongside fellow researchers David Omand and Jamie Bartlett while working at the company.

Away from CASM, he is a Visiting Research Fellow at King’s College London, a fellow at the Global Initiative against Transnational Organised Crime, a Senior Fellow at the Institute of Strategic Dialogue and is a member of the British Computing Society’s Society Board. He is also the author of The Death of the Gods: The New Global Power Grab, which was received with critical acclaim and won the 2019 Transmission Prize. He has also had a successful career on TV as presenter of Click, the BBC’s technology show. He has also appeared on BBC News, CNN and Sky News as well as radio stations including 5Live, LBC, and Radio 4. He is also an accomplished writer having produced articles for The Guardian, The National, The Sunday Times and The New Scientist, among other national and international press outlets.

Carl Miller is an experienced speaker having conducted a TEDx talk and spoken to a number of major organisations such as the UK Parliament, Shell, The Home Office and Wired. As a speaker, he draws on all his experience to examine what the digital world means to his audience and how it impacts their lives and work. Calling on first-hand accounts and empirical evidence he has gathered, his talks are both engaging and informative, making them perfect for any audience that is interested in how the digital world impacts them and how to keep up with the changes. 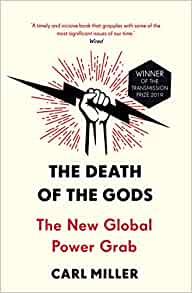 The Death of the Gods: The New Global Power Grab

How to hire Carl Miller

Contact the Champions Speakers agency to provisionally enquire about Carl Miller for your event today. Simply call a booking agent on 0207 1010 553 or email us at [email protected] for more information.

"The audience was blown away. The combination of fascinating ideas about power and bizarre personal adventures were a perfect fit for our event" -Alexander, Brave New World Festival, Leiden

"Our audience is generally made up of quite cynical and highly opinionated tech professionals. Carl was a compelling speaker, presenting fascinating, and often deeply technical, material in an engaging, light manner for 45 minutes. All this on his birthday" -Joe, The Register

"Carl is a thought-provoking speaker who grabs the attention of the audience, both with the power of his ideas and the engaging way in which he delivers them"- Rick, Police Foundation

"Carl Miller was an excellent speaker and panel participant at our festival. His arguments were clear, interesting and on-topic. It became a very lively talk panel." - Nina, 4GameChangers