Campbell Bass is unlike most solo artists; his performances bring more to a single song than most music acts achieve in an entire gig! His beautiful voice, charismatic style and ability to put an audience at ease is impeccable and have caused him to make second appearances for multiple clients.

Singing songs from the Great American Songbook, Campbell Bass always gives an excellent set as the solo artist and event vocalist; he performs some of the best and most recognisable songs by American song writers such as Cole Porter, George Gershwin, Jerome Kern, and Johnny Mercer and the solo artists they made famous such as Frank Sinatra, Nat King Cole and Harry Connick Jr.

One of the most sought-after event acts currently working in the UK, Campbell has also been applauded for his ability to update his act by intertwining more recent soul and R&B songs such as Sittin' On The Dock Of The Bay and Let’s Stay Together into his act.

Available as either a solo artist or accompanied by a live band, Campbell is the ideal choice for the music act at any corporate or after dinner event. His ability to personalise his performance to each of his client's needs also makes Campbell Bass an excellent wedding singer with a set full of beautiful and romantic songs to compliment your big day!

Contact the Champions Speakers agency to book Campbell Bass for your event today. Simply call a booking agent on 0207 1010 553 or email us at agent@championsukplc.com for a free quote. 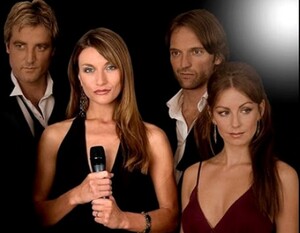