Bennett Arron found himself drowning in debt, as his store card bills, phone payments and catalogue expenditures spiralled out of control. With his frivolous spending reaching dangerous proportions, Bennett found himself penniless, as he and his pregnant wife were left homeless in a disturbing case of careless extravagance. Only it wasn’t him, Bennett had fallen victim of Identity Theft.

As one of the fastest growing crimes in the UK, Bennett is sadly just one of many in an alarming number of identity theft cases. However, as one of life’s truly inspirational ‘glass half full’ people, Bennett pulled himself up from the brink of despair to raise awareness of this callous crime. Demonstrating admirable courage and a steely strength of character, Bennett went on to write a bold comedy show about his experience in a disturbingly factual yet hilarious account of the devastating effects of identity theft.

The shows humble hilarity was critically acclaimed at The Edinburgh Festival, leading in Bennett’s offer to direct a Documentary for Channel 4. Proving a huge success, the Documentary How To Steal An Identity was Pick of The Week in The Guardian and The Telegraph and was dubbed 'Fascinating and Disturbing' by the TV Times.  The documentary demonstrated the shocking simplicity of identity theft, as Bennett famously stole the identity of the then home secretary, Charles Clarke with alarming ease. Having returned to life from the arms of anguish, Bennett unexpectedly found himself shortlisted for a BAFTA.

Now an award winning writer and stand-up comedian, Bennett is a recognised inspiration and conqueror of adversity, resulting in his selection to perform as a motivational speaker at a vast number of corporate events and functions around the UK. In addition, Bennett has also appeared as Guest Speaker at The International Fraud Convention in Italy and the International Congress on Anti-Fraud & Anti-Corruption in Poland. Most recently Bennett spoke at Info-security Europe and was the Opening Keynote Speaker at Auscert in Queensland, Australia.

Having also appeared on SKY News, Channel 4 News, Lorraine, Radio 4 and Radio 5 Live, the comedian is high in demand for his expertise in the world of fraud prevention and is equipped with a wealth of experience, ensuring consummate professionalism at any event. Equally adept as an after dinner speaker, Bennett also proves the popular choice as awards host, as his heartfelt yet hilarious delivery captivates, motivates and inspires an audience.

Contact the Champions Speakers agency to book Bennett Arron for your event today. Simply call a booking agent on 0207 1010 553 or email us at agent@championsukplc.com for a free quote.

You brought a welcome realism to the consequences and frustrations of falling victim to identity fraud while at the same time avoiding making this a tale of woe. By combining humour and storytelling flair you achieved the seemingly impossible; making financial fraud entertaining! - Owen, Callcredit Limited

You gave a fantastic presentation. With a diverse workforce of many different nationalities your thought provoking talk was of much value and helped staff understand the importance of protecting their information and the true extent of how identity theft can cause so much damage. - Katie, LOCOG 2012.

Your terrible experience as a victim of identity theft combined with your talent as a comedian enabled you to put a serious message to an audience in a very engaging, entertaining and informing way. - Jim, Experian 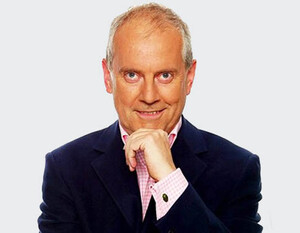