Simon Hartley is a globally recognised high-performance sports psychologist and performance coach. He has spent over 25 years studying and building highly successful teams across a range of domains – from the business world to a variety of sports including Rugby, Football and Formula One.

After completing his Msc. in Sport and Exercise Science Simon has continued to develop and refine the principles and skills required to perform at the highest level. He has studied Michelin starred chefs, high ranking executive executives and sportspeople in the most competitive sports in the world. He began his career as the Head of Sport Science at Sunderland Football Club he has been invited to work with several Premier League Football clubs since then. Not only that Simon has been involved with several Bundesliga Clubs, Olympic programmes and Tennis stars.

His expertise has been requested by some of the world highest performing athletes. The athletes he has worked with have collectively won more than 30 medals and world records. Simon has also been involved in the world of the military, Simon has spent time with the Red Arrows and Special Forces Units to study and extract nuggets of information which he is then able to apply to his consultancy practice. He leaves no stone unturned in his search for excellence.

Simon’s experiences in the world of high-performance sport have lent themselves perfectly to the business world. He is no stranger to the most successful organisations in the world he has consulted organisations including Proctor & Gamble, Zurich, and General Electric. An accomplished author, he has written 8 books including the much-heralded ‘Stronger Together; How Great Teams Work’ which distils principles that enable a world-class mindset and culture that repeatability delivers success at the highest level. Now booked as a speaker, Simon Hartley is a fountain of knowledge, a fantastic storyteller and a world leader in the formation of high-performance teams. 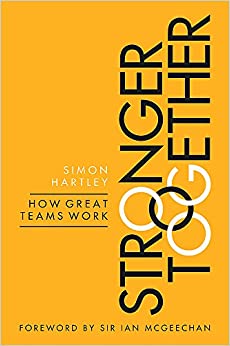 Stronger Together: How Great Teams Work

How to hire Simon Hartley

Contact the Champions Speakers agency to provisionally enquire about Simon Hartley for your event today. Simply call a booking agent on 0207 1010 553 or email us at [email protected] for more information.

Simon Hartleys Speaking Topics Are Below:

World-class performance is made in the mind. The difference between you and elite athletes who push through and deliver when it matters most.

Elite leaders know the importance of focusing on the fundamentals The difference between you and the serially successful CEO.

Teamwork
A world-class team is the ultimate leverage. The Six Characteristics of World Class Teams.

“As a speaker, I have watched Simon on many stages and he has a way of pitching his message to land at just the right time and in just the right way, to have the audience hanging on every word he says. I'm always blown away at the inspiring and wise words that Simon delivers to his audiences, using his experience of working across various different world class fields from sport to business, Simon shares his findings and passion for helping people to deliver their best performances every time!” – Chris Cook, Olympic Athlete

“Simon has been a regular contributor at The Recruitment Network and his genuine expertise and his phenomenal experience of working in business and sports means he can add huge value in anyone, individually or collectively who is looking to get even better at performance, resilience and mental toughness. Not only does he have the stories, but he's got so many simple, yet powerful tools and tips to help any leader develop themselves and their team. Really insightful.” – Gordon Stoddard, The Recruitment Network.