Mark Ormrod MBE is a man who repeatedly defies the odds. Mark spent 10 years in the Royal Marines, while on a routine foot patrol on Christmas Eve in 2007 Mark triggered a hidden improvised explosive device. The explosion caused serious injuries and Mark became the first triple amputee of the Afghan conflict. He lost both his legs and his right arm. He was told he would never walk again, but remarkably Mark went on to not only walk but go on to complete physical challenges raising money for charity and competing in the Invictus Games. Now booked as a speaker Mark regularly delivers hugely inspiring speeches which contribute to the success of conferences and events.

Mark is a living example of overcoming tragedy, his 'Marine ego' kicked in when he was told he would never walk again and he made it his mission to master his new bionic legs. While in intensive care he proposed to his now-wife and set a goal to walk down the aisle with his fiancèe and to stand to receive his campaign medal. He promptly achieved those goals and set about making new ones. Mark has skydived, hand cycled around the UK in a month and won medals at the Invictus Games. He is the embodiment of mental resilience. His talks

Mark has been granted multiple awards, including an MBE for services to the Royal Marines and Veterans. He has been awarded the 'Freedom of Plymouth' in honour of his fundraising activities, he has raised over £500,000 for charities through a series of different challenges in support of veterans including; running 5km using his prosthetic legs and a 99.9-mile overnight cycle challenge. He also won silver and bronze medals at the Invictus Games in 2017 and the Jaguar Award for exceptional performance. He also won 4 gold medals at the 2018 Invictus Games.

He is a firm believer in the power of goal setting, no matter the setback Mark has also gone above and beyond displaying phenomenal mental fortitude in the process to hit meet the challenge at hand. He authored the book 'Man Down' in 2010 cataloguing his experiences and has appeared on the BBC and ITV to share his story. Mark is a phenomenal human being with a hugely inspiring story, he is a fantastic choice for speaking engagements for conferences and events. 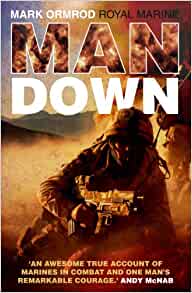 How to hire Mark Ormrod

Contact the Champions Speakers agency to provisionally enquire about Mark Ormrod for your event today. Simply call a booking agent on 0207 1010 553 or email us at [email protected] for more information.

Mark Ormrod's speaking topics are below;

"Mark delivered an inspirational speech that made you sit up and take note. The room was captivated by Mark’s story of resolve, determination and success against overwhelming odds." - Rob, Pure Comms