Lesley Garratt CBE is Britain's most well-known soprano solo artist and musician. She inherited her love of music from her family and has implemented this into her professional career. Lesley has been performing for more than 30 years and has been one of the most successful classically trained sopranos in recent years. When booked, she will stun audiences with her voice and ensure the occasion is an instant success.

Graduating from the Royal Academy of Music, Lesley won the Decca Prize of the Kathleen Ferrier Award in 1979, which kickstarted her career as a female opera solo artist. Her professional debut was in 1979, as Amor in Orontea. Lesley has performed in nations including the US, Russia, Brazil, Australia, and Taiwan alongside other well-known artists. Lesley can create fantastic music outside of her comfort zone which is why she has become greatly successful within her industry.

Lesley has performed at multiple sporting events throughout her career, including FA Cup Finals and Tour de France stages. She was also awarded a CBE in 2002 for her services to music. Lesley has had the opportunity to be part of numerous television appearances, including being a panellist on Loose Women, appearing on This Morning and being a Judge for Comic Relief does Fame Academy.

Lesley Garratt CBE has endured a remarkable career, performing on some of the largest stages around the world and appearing on some of the most popular television shows in Britain. She is an ideal personality to have at events, interacting with guests and talking about her times in front of global audiences as well as performing multiple musical genres and recognisable tunes. 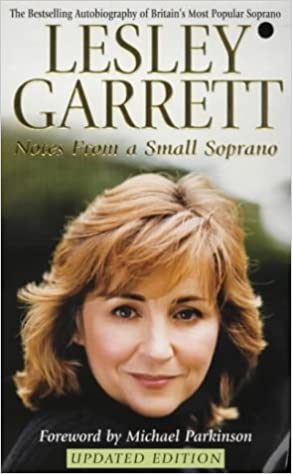 Notes From A Small Soprano

How to hire Lesley Garrett

Contact the Champions Speakers agency to provisionally enquire about Lesley Garrett for your event today. Simply call a booking agent on 0207 1010 553 or email us at [email protected] for more information.

"The audience was mesmerised with Lesley's performance." - Allianz Cornhill

2008- Joined the cast of Carousel as Nettie Fowler

2002- Awarded a CBE for her services to music

1979- Won the Decca Prize of the Kathleen Ferrier Award

Lesley is a member of the board of the English National Opera and a Vice President of Harrogate International Festivals.

Faith Tucker
Semi-Finalist Of Britain's Got Talent (2019) With Over 500,000 YouTube Views Of Her Audition Video
View Profile
Image