Hope Powell is a former professional footballer and managed the England’s Woman’s team. A pioneer for woman‘s football in the UK. Hope helped bring about the first professional contracts and was the first woman to achieve a Pro License. As a speaker, she talks about her career and how she overcame the challenges in her way and motivates her audience to help fight for equality for all groups.

Powell’s playing career was not straightforward as FA rules almost forced her out of football as they banned her from playing for her school side beyond 11. Determined not to be forced out of the sport she joined Millwall Lionesses. She later spent two years with Friends of Fulham where she reached the FA Cup final scoring twice in a defeat to Leasowe Pacific. She returned to Millwall after the cup defeat and became the team’s record goal scorer. She won the FA Cup and the Greater London League on her return to the club. She would go on to form Bromley Borough with other Millwall teammates and quickly progressed through the league system. The club was renamed Croydon after reaching the topflight and Hope showed her leadership capabilities as captain of the side that won the FA Cup and National Premier Division. Away from her club duties Hope made her England debut at the age of 16, playing 66 games and scoring 35 times.

A natural leader, Hope started her coaching journey while still playing, obtaining her B licence. In 1998 she was named England Woman’s Head Coach. Her appointment made her the youngest ever coach of any English National Football side. She was also the first female and Black person to be named coach of any English National Football Team. Hope continued to shatter the glass ceiling and in 2003 became the first female to achieve a UEFA Pro Licence, the highest coaching badge in football. Highly successful she guided England to the 2009 European Championship final and the quarter-finals of the 2007 and 2011 World Cups. Off the pitch, she helped oversee a complete restructure of the football pyramid and the induction of professional contracts for female players. Hope also coached the first-ever GB Woman’s football team at the 2012 Olympics. Since 2017 she has managed Brighton and Hove Albion, establishing the club in the Woman’s Super League. In recognition of her achievements, she was awarded a CBE after receiving an OBE in 2002. She is also an inductee in the English Football Hall of Fame.

As a speaker Hope discusses the barriers she faced to become a footballing icon, such as her West Indian background, being a woman trying to get into a ‘man's game’, being a member of the LGBTQ community and the violence she experienced first-hand growing up. Her hard-hitting discussions inspire and educate by talking about diversity and inclusion and chasing your dreams even in the face of adversity. 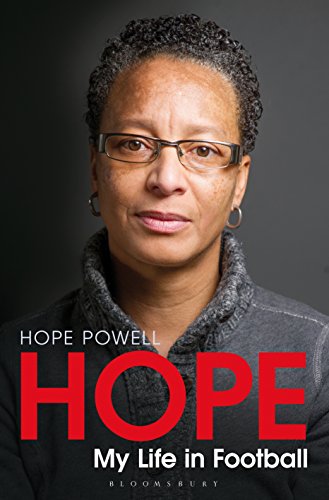 Hope: My Life In Football

How to hire Hope Powell

Contact the Champions Speakers agency to provisionally enquire about Hope Powell for your event today. Simply call a booking agent on 0207 1010 553 or email us at [email protected] for more information.

Feedback from virtual events and webinars

During the Covid-19 pandemic and the temporary halt of live events, Hope was booked as a speaker for a range of virtual events and webinars. Read her latest feedback below.

"We can say with confidence that Hope delivered a very positive and passionate message and had the audience captivated, we wanted even more! The Q&A bar was very well utilised by the audience as far as Scotland locally and internationally - we held a healthy session with her. She was inspiring and encouraging and many asked when we will host another event!" - Sam, Bedfordshire Police