Having begun his career as a humble estate agent, Geoff Shreeves soon became one of the most famous voices in football. In 27 years as a sports reporter and journalist for Sky Sports, he has covered the Premier League, Champions League and international fixtures.

Known for his touchline reporting, Geoff has interviewed some of the brightest names in the game. Armed with an inventive interview technique, prompting the answers that make headlines, he has been a prominent part of Premier League coverage since the league's inception.

“It’s not about me, I’m irrelevant. It’s about getting the best possible answer.”

Acknowledging his role as the enabler, Geoff asks the right questions at the right time. Sometimes winding the pros up and at other times prompting laughter or emotion - years of experience has taught him that what matters is the coverage he gets in return.

He is also regularly cast as the voice of FIFA football games and was a commentator on both FIFA 14 and FIFA 15. Highly-respected by fans and fellow pundits alike, Geoff is an enthralling sports journalist and presenter sought by both television networks and corporate event planners.

In his time as an after dinner speaker, Geoff has imparted his knowledge, passion and experience of the game of football on audiences around the world. In recent times he has joined a panel at the University of Brighton, at an event focused on sports journalism, he officially opened Wingate & Finchley's new stadium and has attended golf days including for New College Worcester, where he competed with fellow broadcasters including Ben Shepherd, Alan McInally and Richard Keys.

Geoff hosted a Question of Sport charity dinner in 2019 and spoke at the 2017 Nordoff Robbins Legends Of Football gala dinner. He has appeared at endless fundraising dinners and award ceremonies as the award host including the St Albans City Youth FC End of Season Dinner.

Ideal for sharing his incredible experiences both as a journalist and in the game of football, Geoff Shreeves is without a doubt among the finest after dinner football speakers in the UK today. Humorous and authoritative in equal measure, Geoff is a long-standing great with plenty to share.

Contact the Champions Speakers agency to book Geoff Shreeves for your event today. Simply call a booking agent on 0207 1010 553 or email us at agent@championsukplc.com for a free quote.

When he's at corporate events, Geoff is known to cover the following topics: 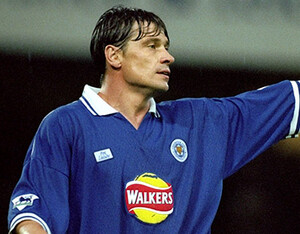