Social Robotics and Human Robot interaction pioneer, Cynthia Breazeal, is an MIT Professor, teaching Media Arts and Sciences and directing the Personal Robotics Group at the Media Lab. Cynthia is also the Chief Scientist at Jibo, Inc. the company she founded with Jeri Asher in 2012 and which now employs eight engineers who are working towards the release of a super-intellectual robot with humanised qualities.

Cynthia’s peer-reviewed publications total more than 100 and focus on the topics of artificial intelligence, human robot interaction, robot learning and autonomous robotics. Her book Designing Sociable Robots was first published in 2002 and is part of the ‘Intelligent Robots and Autonomous Agents’ series of MIT-published works.

As an expert in autonomous robotics, human robot interaction and artificial intelligence, Cynthia offers her knowledge to a variety of editorial boards, responsible for overseeing the areas surrounding autonomous robotics, as well as this, she is also an Overseer at Boston’s Museum of Science.

Cynthia was recognised as one of Fortune 500’s Most Promising Women Entrepreneurs in 2014 and has been awarded the L’Oreal USA Women in Digital NEXT Generation Award and the 2014 George R. Stibitz Computer & Communications Pioneer Award for her contributions to the development of Social Robotics and Human Robot Interaction. 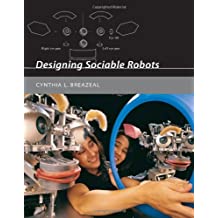 How to hire Cynthia Breazeal

Contact the Champions Speakers agency to provisionally enquire about Cynthia Breazeal for your event today. Simply call a booking agent on 0207 1010 553 or email us at [email protected] for more information.