Chris Hughes is a highly successful entrepreneur best known for co-founding Facebook. Having been involved in a number of startups, entrepreneurial ventures, and directorial positions, Chris is a fantastic speaker for corporate audiences wanting to gain a greater insight into risk and reward, breaking the business mold and innovation in technology. As a young student in his freshman year at Harvard University, Chris was studying history and literature when he was recruited in 2002 by Mark Zuckerberg. Zuckerberg was developing what would become the number one social media site, Facebook, and required Chris Hughes for beta testing and creative aspects of the site.

Involved in designing and inventing key elements of Facebook Chris was responsible for some of the best-loved aspects of the global site. Chris left his role at Facebook officially in 2012 after deciding he wanted to follow separate business opportunities. Since leaving Facebook, Chris Hughes has been heavily involved in politics. Joining Obama’s presidential campaign in 2007, Chris was announced as the Director of Online Organising. Bringing his online expertise to the role, he stayed in the position for the duration of the campaign, which saw Obama become the president.

He is also a supporter of Freedom to Marry which fights for equal marriage rights for same-sex couples. As an eager entrepreneur, Chris founded Juno, a non for profit social network that helps people to help others. Additionally, with his money released from Facebook, he purchased a majority stake in The New Republic magazine with the ambition to make the decades-old publication a success in a digital era.

In 2016, just four years after his investment, Chris admitted it had been a harder undertaking than initially appeared, and sold the company. A pivotal moment in his career, as a keynote speaker Chris discusses how he overcame the obstacle of failure and used it to motivate him. Most recently, Chris has been working as the co-chair of Economic Security Project which seeks to provide financial security to people. He has also become a highly successful keynote and after dinner speaker, covering a range of business-relevant topics including: having courage in your decisions, risk and reward, and being innovative in a technical world. 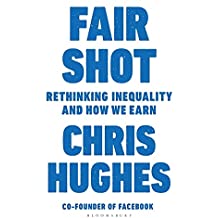 Fair Shot: Rethinking Inequality And How We Earn

How to hire Chris Hughes

Contact the Champions Speakers agency to provisionally enquire about Chris Hughes for your event today. Simply call a booking agent on 0207 1010 553 or email us at [email protected] for more information.