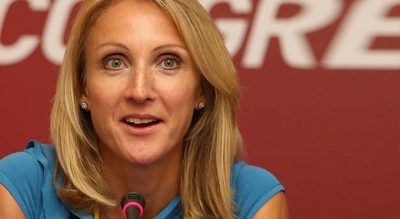 What are you most excited to see at Tokyo 2020?

"For me, I think always watching the event that I competed in, I'm more drawn to those. Knowing the people, knowing the characters so, obviously, I'm interested to see what Mo can do when he goes back to the track, to see Dina build on what she did last year which was phenomenal.

"I really want to see Kat (Katarina Johnson-Thompson) do well because I think, having overcome all of the heartache that she has been through at major champs, to get there and to perform well on the Olympic stage I think will really complete her as an athlete, and she showed last year, in Doha at the World Championships, how capable she is of doing that."

Can we expect surprises and any new world records in Tokyo?

"I don't expect World Records at all, I think it will be championship type racing. But yes, you always get some surprises, you will get the expected big names there. But the Olympic Games usually throws up some surprises. Sometimes it is just about what happens on the day. Already the marathon is a tough event to prepare and get right, you spend 3 or 4 months preparing for one day and if you're not right on that day it doesn't pan out - you can't just do another one a week later. And the Olympics kind of intensifies that - it's once every four years.

"It never worked out for me at all at the Olympics, and I think, maybe some of that was because it became in my head, too big a deal. I think I was fine until after Athens when it became something really big to get right the next time. Which actually was counterproductive because I was almost obsessing about it too much. I think sometimes people get better results by almost not caring about it. It is kind of the apex of our sport and what everyone wants to do. But actually, it's the same standard as our World Championships yet it becomes a bigger deal because it just is every four years."

The Tokyo 2020 marathon has moved to Sapporo due to heat concerns; it's expected to be five to six degrees cooler - how much of a difference does that make?

"I've read different reports, some say 5 or 6 degrees, some say it can be as little as 2 degrees difference [in temperature]. I think it's hard psychologically for the runners to be 500km away from the main Olympics because you kind of feel removed from it. But at the same time, I think conditions will be better for marathon racing which at the end of the day is what we want to see.

"We saw that a little bit with the World Championships last year in athletics in Doha. For the women's race which was earlier in the championships, the conditions were a lot lot tougher than for the men's race and we probably got a better race, I mean we would say that because we had Callum running so well, but we did get, I think, a better race and fewer dropouts in the men's race. I think it's good that they're finally looking at the health of the athletes and the best thing for the athletes on where they stage things, even though I think there was a little bit of self-interest in terms of the IOC not wanting to be slated like the IAAF were for Doha.

"I think it's important that they considered that, but I also think it was important to consider that in Japan marathon running is like the blue-ribbon event. They're not really bothered if you put the 100m in Sapporo but they were pretty angry that they put the marathon there. That is probably unique to Japan and I'm not sure of the impact that it would have with Japanese was considered. People had bought tickets for the rest of the Games assuming the marathon would be for a large part free to watch if you're somewhere along the route - and it would probably be the most-watched event in Japan."

You can book Paula Radcliffe for your event today. Simply get in touch with a member of our team for a free quote.