Following 39 years of battling with his identity, Matt Ellison took to the speaking circuit to share his powerful story. He transitioned from female to male in 2013, exhibiting immense strength and self-belief in doing so – Matt is living proof that being your true self, is the most important factor of a happy life. Now, he tours the world with his incredible message, that inclusion and acceptance lead to self-fulfilment.

In his exclusive interview with Jack Hayes, our Managing Director, Matt opened up about his personal journey. Touching upon the impact his transition had on his family, friends and business, he revealed the importance of inclusion in the workplace to promote diversity and acceptance. Matt opens his audiences eyes to the life of a transgender person, and how their choice of words can damage someone's emotional wellbeing. Read our interview below.

Who is Matt Ellison? 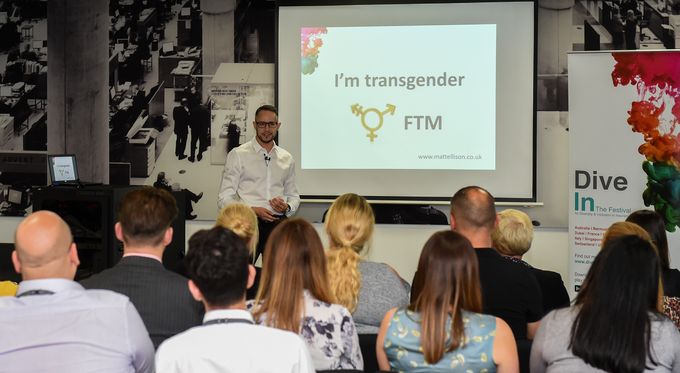 Matt Ellison presenting at the Dive In Festival, on the 24th September, 2019.

For most of his life, Matt Ellison battled with the feeling that he was living a lie. Though he was born a biological female, it became quickly apparent that he identified as a male – Matt was transgender. It wasn’t until he was in his 30s that Matt found the strength to transition, with the help of a specialist counsellor.

Matt uses his story of bravery in the face of societal expectations, to inspire acceptance and understanding in others. As a motivational speaker, he presents at schools and corporate events alike, teaching audiences the value of diversity in the modern world. Many come away enlightened, some even empowered to embrace true self, a testament to the power of Matt’s story.

Q: What was your emotional experience of transitioning from female to male?

"From a very early age, with the first signs of anything gender coming in, so maybe 3 or 4 years old, there were toys I wanted to play with, and clothes I wanted to wear, but I was being told no. It made me think, ‘OK, what's going on here?’”

"Then something happened when I was five. I told my parents that on my sixth birthday, I was going to be a boy. The reaction I got wasn't good, and I immediately learnt that society wasn’t accepting and that it was a bit ‘freaky’. So, I shut up about it. Meaning from age five, I swore I would take this to my grave.”

"When I was younger, there was no internet, so I didn’t know what was possible. But as I got older, I could watch others online, documenting their transition from female to male. I could see what an amazing job hormones and surgery could do. Yet, I’d already put up my barriers and decided I wasn’t going to act on this. That was a difficult time, knowing what was possible, yet due to my own barriers it was still completely out of reach.”

"I had several coping mechanisms in place, but over the years I started to struggle more and more, and the thing that finally urged me to seek help was looking at other transmen’s journeys on YouTube. I’d looked at things on and off over the years, but this time it gripped me too tight. For about a year, I was watching YouTube clips and getting more and more obsessive and desperate, coming home from work and spending hours on YouTube.”

“Until in the end, I decided I needed to get help; even if it was just for more coping strategies to stay living as [a] female. So, I went to see a counsellor who specialised in gender dysphoria. There was this little bit inside of me that thought, I know only I can make this decision, but I really hope he’s able to give me […] permission to transition. And you know what? He did!”

"One of the things they talk about in counselling terms is ‘the therapeutic moment’. That one small thing that flips everything upside down and allows you to see things in a different way, or whatever it is you need to take the steps you need to. And I remember very clearly my therapeutic moment in my very first session.”

"Having made the decision, one of my fears was now, how would people react? Would I lose friends and family? Being self-employed, would [my] business fall apart?”

"However, not only did none of my fears materialise, but in fact the complete opposite happened. It brought me closer to my family and friends. They enjoyed sharing my journey, and had a lot of respect for the courage I had.”

"It’s interesting that when people said to me ‘you're so brave’ my reply was ‘no, it was easy. Really!’ After a while, I began to realise what I was saying. Of course, this wasn’t easy! If it had been, I wouldn't have waited 39 years to take action and make changes. So, something changed, to make this journey feel easy.”

"I’ve thought long and hard about how that happened. How was it ultimately so easy? And what lessons can be learnt that may help others? I now share these lessons in my talks. The principles of facing something so profoundly difficult and making such a huge and fundamental change apply to everyone in all areas of their professional and personal life.”

"One thing I’ve learnt is how fear and understanding are inversely proportionate, so knowledge is key to facilitating change. The counsellor gave me some knowledge, and that made my biggest fears easy to overcome.”

"I'm six years into transition now, and I'm still changing physically and also emotionally. Things don't change overnight. I'm growing in confidence and I'm still reinventing myself. It's been an incredible journey; I don't know why I was so scared."

Q: How was your transition received in a working environment?

"When I came out, I was running a guitar school; I was worried what the parents of the younger students would think, and was concerned it might mean a career change. Yet in fact, I had 100% support. However, this isn’t always the case and I have seen many trans people struggle with work, friends and family.”

"I'm thinking, wow the parents just want a guitar lesson for little Jonny, but they've now got to go home and have a really difficult conversation with their eight-year-old about the guitar teacher. But all of them did it. I was expecting, with 40-50 or so students at the time, that as a percentage of the population are not supportive of these issues, I was going to lose a few students.”

“But I didn’t lose one; they all went home and did have the conversation. Interestingly, many parents reported that when they told their child the response was ‘oh yeah, we've done that at school Mum’, and the child went straight back to their play station, like they’d just been told something really unsubstantial, like it was raining. That was incredible!”

"When it came to becoming Matt in the work place, I was worried about scaring away new clients, particularly on the phone, having to say "I'm Matt" while still sounding like a girl. So, although I’d told all current students what was happening, I’d held off being called Matt until hormones had worked their magic and my voice had broken. What was amazing was that students kept asking ‘when can we start calling you Matt?’"

Q: What are the benefits of increased diversity in the workplace?

"There are many benefits which I feel are divided into two main facets – one for the group who are being included, and the other for the group doing the including.”

"For businesses doing the including, they will have a broader range of talent to choose from. Why would you limit yourself by not considering a section of the population? If the ideal person for the role, who will help your company the most, is black or gay or transgender then you’d be foolish not to employ that person based on that.”

"Many of the benefits for the group being included are fairly obvious, they will have better employment opportunities, will feel included, accepted and safe at work. This means they are happier. This benefits everyone as it creates a warmer environment for both groups. Happier employees will more likely work to their maximum potential, and teamwork will be stronger between both groups, benefiting the company and everyone involved.”

"Also, word spreads quickly. So, if you offer a safe and inclusive workspace you will find the minority groups learn this, and seek employment from that company. Again, opening up a broader pool of talent to choose from.”

"An easy way to kick start an inclusive environment is to be mindful of what’s being said. I often hear people say, ‘it's PC over the top, you can't say this, you can't say that’. Yes, we should have freedom of speech, but not at the expense of others. Most people don’t consider how their words may impact those around them or that someone from the group they are talking about may actually be in the room with them, hearing everything they say.”

“If that someone is considering coming out as gay or trans, they will probably spend months or likely years, considering how their disclosure might be received, and whether it’s safe to disclose. Bearing in mind they can’t it take back; they will spend this time looking for clues and agonising over this.”

“So, for example, a comment about Tom Daily and his male partner about to become parents, would indicate whether those around them are accepting or not. They’ll be listening to what’s being said, but also gauging reactions of others listening to the conversation. Of course, the people in the room are completely unaware they are being monitored in this way.”

"However, if someone does disclose and they are welcomed with open arms, this can give confidence to others to do the same. Which then creates a positive cycle and an increasingly warmer environment. I’m pleased to say we can already see a huge shift in the understanding of diversity and inclusion in the workplace. Large corporations are now creating senior roles in diversity and inclusion; as many now understand the importance of this."

Q: How have audiences responded to your speeches?

"One of the most frequent comments I get from audiences after a talk is that I raised many points they’d not considered, and they learnt a lot they weren’t even aware they needed to know. They leave with a far better sense of what being transgender is about, and so are more empathetic.”

"Also, businesses are grateful to learn more about the legislation around transgender issues, as many are still very unaware. This means they can often completely unwittingly commit criminal offenses.”

“Just one example is with regard to the gender recognition certificate. Many companies are aware there is such a thing but still have a lot to learn about what it does and why.”

“They often ask to see this certificate, claiming they can’t update a person’s name, gender and title without it. But this is incorrect! Do you know that in fact it’s illegal to ask to see a gender recognition certificate? It is also illegal to make a copy of one. To see the certificate, or even knowing of its existence, does the exact opposite of one of its main purposes, to allow anonymity.”

"With today’s greater acceptance of transgender people, the numbers of trans people coming forward for treatment is approximately doubling every three years. So, this is an important area that is relevant to all businesses."

To book Matt Ellison as the speaker for your corporate event, function or conference, simply contact the Champions Speakers agency by filling in our online contact form or by calling a booking agent directly on 0207 1010 553. Alternatively, you can browse our diversity and inclusion speakers.