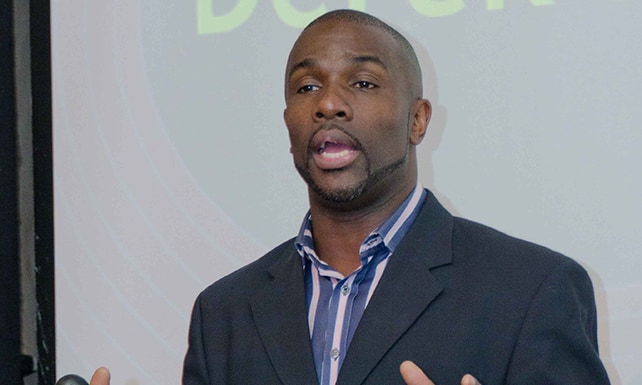 It gives us great pleasure to announce that Champions (UK) plc is to represent one of Britain’s best loved athletes, former World, European and Commonwealth champion, Derek Redmond. Since retiring from athletics Derek has pressed on with a wide range of projects and forged a sterling reputation as one of the most powerful motivational speakers on the circuit.

The former 400 metre sprinter was among the world’s very best during the late 1980s and early 1990s, twice breaking the British 400 metre record and playing a key role in the Great Britain 4x400m relay team that repeatedly overcame the perennial favourites, the USA.

Unfortunately, his career was blighted by injuries but in 1992 such misfortune revealed Derek’s qualities as a human being. Halfway through the 400m semi-final, a race from which the Olympian was expected to qualify, Derek tore a hamstring. Despite knowing his race was run, he refused to be beaten and began to limp painfully towards the finish line. In a scene that summed up the Olympic spirit and with millions watching across the world, Derek’s father broke through the security cordon to help his son struggle to the tape.

Despite being told by surgeons two years later that he would never run again, Derek indomitable character saw him represent England in basketball and narrowly miss out on a place in the England Rugby Sevens squad. He served formerly as a Director of Development for UK Athletics, appeared on the hit show Gladiators and currently races motorbikes in a team he co-owns.

Derek Redmond simply won’t lie down and uses his experiences to inspire people as one of the finest motivational speakers available. We are incredibly proud to be associated with such a spirited individual.

To learn more about how Derek can help your company’s next event, or to book any one of our wide range of quality after dinner speakers, fill out our online form or call Champions Speakers on 0207 1010 553.