Kate Walsh is an English Hockey gold medallist. Currently the team Captain for Great Britain and England, Walsh has dedicated her life to Hockey. As an active sports person, Walsh has won Hockey Writers Club UK Player Of The Year twice. In 2003, Walsh shortlisted for the World Player Of The Year Award and later on, in 2007, Walsh was named Great Britain Hockey Athlete Of The Year. Walsh made both her England and Great Britain debuts in 1999 and has gone on to play a full range of international tournaments including three summer Olympics, four Hockey World Cups andfour Commonwealth Games.

As a defender, Walsh has twice won medals at International tournaments at her hometown of Manchester - silver at the 2002 Commonwealth Games and bronze at the 2007 EuroHockey Nations Championships. During the 2012 London Summer Olympics, Walsh was hit by a stick in the team's opening match against Japan and suffered a broken jaw, which was expected to end her journey in the Olympic games. However, despite all odds, after missing two matches, she returned to play in their penultimate group game against China.

Alongside playing for England and Team GB, Walsh has also played club hockey for Reading in the England Hockey League Premier Division. Walsh was appointed Member of the Order of the British Empire in the 2015 New Year Honours for services to hockey. On February 2016, Walsh became the most capped female in Great Britain during test matches in Australia when she overtook Karen Brown who had 355 caps.

Also in 2016, the British women's field hockey team won gold at the Olympics; as Kate and Helen Richardson were both on that team, this made them the first same-sex married couple to win Olympic medals. A brilliant motivational speaker, Kate Walsh is a prime example of one person can achieve. Through sheer determination, success and failure, Walsh has showed the right attitude that has allowed her to be so successful in what she loves doing best; hockey. 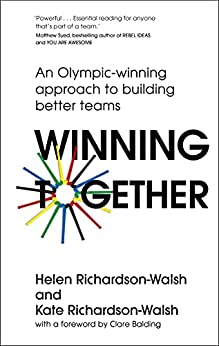 Winning Together An Olympic-Winning Approach To Building Better Teams

How to hire Kate Richardson-Walsh

Contact the Champions Speakers agency to provisionally enquire about Kate Richardson-Walsh for your event today. Simply call a booking agent on 0207 1010 553 or email us at [email protected] for more information.

When she's at corporate events, Kate is known to cover the following topics:

"We feel like the conference went well and Kate was definitely a big part of that! Her talk was inspiring, motivating and very emotional (in a good way) The reactions we got after her talk were all super positive. Please tell her that the entire of Intuo is a bit in love with her." - Emiel, Intuo

“Kate was wonderful, such an inspiring speaker and was an absolute delight to have as a guest. We have been inundated with compliments for her and it seems she really struck the right note with the audience in everything she said about team ambition and leadership” - Mishcon de Reya, Entrepreneurs Forum

"I just wanted to pass on my huge thanks to Kate for last night’s event. She was wonderful. She is such an inspiring speaker and was an absolute delight to have as a guest. We have been inundated with compliments for her and it seems she really struck the right note with audience in everything she said about team ambition and leadership."

“Kate gave a fascinating, insightful interview on leadership, team dynamics and the culture of a winning team, all in a way that was relevant to our senior corporate audience and which perfectly strengthened the core theme of our event: how to achieve gender balance and redefine leadership” - FT Women at the Top Summit

"Please could you pass on our huge thanks and a lot of love from our U80 for Kate? The session was more than we could have hoped, perfectly balanced and pitched and really authentic and engaging, we really couldn’t have hoped for anything better. Thank you for the honesty and openness." - Emma, Mars Petcare