Famed TED Talk presenter and world renown game designer, Jane McGonigal, is on a mission to make a difference with her craft. The inspiring speaker is a two-time New York Times bestselling author, celebrated for her incredibly influential novels Reality is Broken: Why Games Make Us Better and How They Can Change the World and SuperBetter: The Power of Living Gamefully. Jane is even the creator of her own game, SuperBetter, which helps players to process and understand mental and physical illnesses, like depression and chronic pain.

When appearing at events, this confident speaker can discuss not just the process of designing a game, but the health benefits of her game, SuperBetter, and how she achieved such a feat. As an after dinner speaker, audiences are enamoured by Jane's career and inspiring achievements as a female designer in a male dominated industry. With a combined total of over 15 million views on her TED Talks, Jane remains one of the most popular speakers that the organisation has ever seen. Titled "the game that can give you 10 extra years of life" and "gaming can make a better world", her presentations offered audiences an insight into the health benefits gaming.

In her Wall Street Journal interview Jane talks about her 2022 book "Imaginable: How to see the future coming and be ready for anything " which details how gaming and the metaverse allows us to create psychological safe spaces in which to better prepare for the future. By dramatising and experiencing a hint of a potential future event that might be 'unimaginable' until it happens, such as a pandemic, people can pre-process the event and feel less blindsided by whatever might come next.

Jane is using her platform to promote a more positive attitude, both as a games designer and a public speaker. Including location-based and alternate reality themes, Jane's games are multi-dimensional, providing both entertainment value and better health.

Jane McGonigal has been recoginised by leading industry institutions as one of the greatest experts on futurism and technology;

As a teacher at the San Francisco Art Institute and the University of California, she has also dedicated her career to educating the game designers of the future, ensuring that standards and ethical guidelines are met.

In 2008, Jane was named the Director of Game Research & Development at Institute for the Future, later followed by a role as the Chief Creative Officer at SuperBetter Labs in 2012. Throughout her career, she has played a pinnacle role in the gaming industry, as well as such pioneering games as Evoke and Last Call Poker. Her games have been played in more than 30 countries, in partnership with prestigious causes as the American Heart Association, sporting officials like the International Olympic Committee and elite corporation, the World Bank Institute. With two decades of industry experience, Jane is the ideal technology, after dinner or female inspirational speaker for your event. 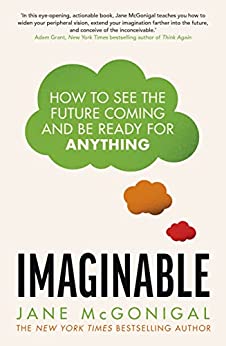 Imaginable: How to see the future coming and be ready for anything

How to hire Jane McGonigal

Contact the Champions Speakers agency to provisionally enquire about Jane McGonigal for your event today. Simply call a booking agent on 0207 1010 553 or email us at [email protected] for more information.

When she's at corporate events, Jane is known to cover the following topics: