Bob Iger is the former CEO of The Walt Disney Company, who spent 15 years leading the global media and entertainment giant through industry defining acquisitions, innovative business strategy remodels and monumental market growth. The eminent business executive is regarded for his unfaltering leadership in a number of high profile positions for over two decades. Offering invaluable insight into management strategy, culminating an innovative culture and a plethora of real life examples from his experience at Disney, Iger is perfectly placed as a keynote speaker.

Fifteen years at the helm of The Walt Disney Company has seen Iger take the media conglomerate through a period of exponential growth. Spearheading the acquisition of Pixar, Marvel Entertainment, Lucasfilm and 21st Century Fox, Iger continually proved his ambitious business strategy would see Disney thrive and capture even more of the market. Prior to his 15 years as CEO, Iger was responsible for international business operations as the President of Walt Disney International and COO from 2000 for a period of five years. Having implemented his creativity, business knowledge and originality into the leadership of Disney, Iger chose to step down as CEO in 2020, paving the way for a new generation of the company.

Graduating with a degree in television and radio, Iger has his ambitions set on a career as a new achor, however, when he joined American Broadcasting Company (ABC) in 1974, little did he know the influential career that would follow. Proving a talented and creative employee, Iger moved his way through the ranks becoming Head of ABC Entertainment, through to being named President and COO of Capital Cities/ ABC. The broadcaster was taken on by Disney in 1996, along with Iger as continued President until 1999.

Named Businessperson of the Year 2019 by Time magazine, and ranked number 25 on Forbes Innovative Leaders 2019, Iger’s impact on global business has evidently been highly influential. Publishing ‘The Ride of a Lifetime…’ in 2019, Iger reflected on his 15 years as Disney CEO and the invaluable skill set it taught him, of which he shares with audiences as a speaker in a bid to instill the same qualities in them. Proving his dedication as an authority for the business, Iger returned to Disney in April 2020 temporarily as Executive Chairman to front their resilient effort against the COVID-19 pandemic.

A seasoned speaker with a dominant career as a global influence in business, Iger can offer a truly transformative talk as a keynote speaker. 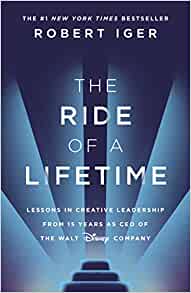 The Ride Of A Life Time: Lessons In Creative Leadership From 15 Years As CEO Of The Walt Disney Company

How to hire Bob Iger

Contact the Champions Speakers agency to provisionally enquire about Bob Iger for your event today. Simply call a booking agent on 0207 1010 553 or email us at [email protected] for more information.

What Can A Teamwork Speaker Do For My Business?
By Chris Tompkins - 02/10/2020
Business
Read More
Image