"I Have a Dream" - Motivational Speaker Series 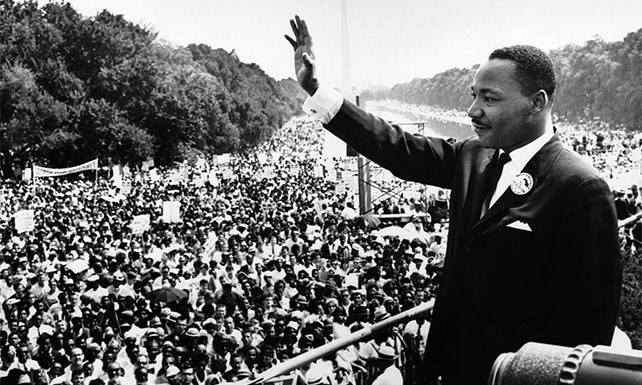 In 1954, after Rosa Parks' famous bus protest and resulting arrest, Martin Luther King came to national prominence within the US.  Being the leading figure in organising the boycott of African Americans of buses in Montgomery.  King didn’t seek leadership, however they needed a leader and King was the neutral choice.

In 1963 after King's imprisonment, he was held in solitary confinement for defying an injunction against one of the most massive civil rights protests that had ever occurred. The children’s crusade was later launched, resulting in white police using excessive violence against the young protesters which won support for King's cause all over the world.

After the success in Birmingham, this provided further input to the black movement, culminating in the massive march on Washington for jobs and freedom on the 28th of August 1963. More than 200,000 people were in audience at the Lincoln memorial when King delivered his famous speech. One of King's main techniques was the use of phrases such as “let freedom ring”, suggesting that freedom is like a bell that freedom can echo across a country that everyone can hear. His main statement was, “I have a dream” portraying a conjoined dream and spoke for the people as well as his own rights meaning that he was the people and their voice made a powerful influence on his supporters.

The words “I have a dream”, pointed towards a equal society, a free world and a place where every race could live in harmony, changing the society of segregation to a brighter future. This would become a reality in America and across the world. Like other great orators in history - such as Winston Churchill and Abraham Lincoln - King took his speeches very seriously, hoping to change the world and to draw inspiration. In 1964 King was awarded the Nobel peace prize, after his significant progress for the civil rights movement.

King's mark on the world is remembered as the time when equality broke though making changes across the world, making civil rights for everyone and ensuring that everyone had freedom and their own rights. King didn’t just capture a nation with his ideas and speeches, he captured the world.

Champions Speakers have access to a array of inspiring Motivational Speakers and after dinner speakers, converging everything from technology and the environment to business, finance, sports and more. To book a keynote speaker to enlighten or inspire your company’s next event or function, fill out our online form or call us on 0207 1010 553.